Josef Alexander Martínez Mencia (born 19 May 1993) is a Venezuelan professional footballer who plays as a striker for Major League Soccer club Atlanta United, and the Venezuela national team.

Josef Martínez began his career with Caracas. In 2012, he was acquired by the Swiss Super League club Young Boys before spending a year on loan at Thun. In 2014, he was sold to Italian club Torino, and in 2017, Major League Soccer expansion side, Atlanta United FC. He holds the MLS record for career hat-tricks with six in his first 44 games, the record for cumulative goals in regular and post season with 35, the record for most consecutive games with a goal (15), and formerly held the record for goals in a single season (31 in 2018).

He is a former Venezuela under-20 international. In 2011, he made his debut for the senior Venezuela national team against El Salvador, and has since represented his nation at three editions of the Copa América.

Martínez made his debut for Caracas FC on 21 August 2010 against Estudiantes de Mérida, entering as a substitute in the 70th minute, won 1–0. He scored his first goal in a 2–2 draw against Deportivo Petare on 21 November 2010.

On 3 January 2012, Caracas announced Martínez had been sold to BSC Young Boys of the Swiss Super League for a period of four years along with fellow right-back Alexander Gonzalez. He debuted on 5 February 2012 against Servette FC, which the Young Boys won 3–1. After a string of good performances, Martínez was called up to the Venezuela national team, as well as awarded his first start for Young Boys on 21 October 2012, in which he scored his first goal for the Swiss club with a volley in the 50th minute against Grasshopper Club Zürich.

After one season in the Swiss capital city, he was sent on loan to Thun. After scoring 8 goals in 18 games with the team from Bernese Oberland, he was momentarily the top scorer in the Swiss Super League and recalled by Young Boys.

On 7 June 2014, Martínez was sold to Italian Serie A club Torino for a reported fee of €3 million. He made his debut in a 0–3 away win against Sweden's Brommapojkarna in the third round of the 2014–15 Europa League. He scored his first goal for the Granata in the return leg, won 4–0 in Turin (7–0 on agg.). 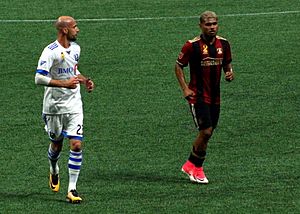 Josef Martínez playing for Atlanta United on September 24, 2017 against the Montreal Impact

On 2 February 2017, Martínez was loaned with a buying option to Major League Soccer expansion team Atlanta United. He made his league debut on 5 March in a 1–2 home defeat against New York Red Bulls. He scored his first career hat-trick, and the first hat-trick in the history of the club, in a 6–1 win at Minnesota United the following week.

On 21 March, Atlanta announced they had activated the buyout clause for an undisclosed transfer fee. He was named the MLS Player of the Month for March after scoring five goals in his first three games in the league.

On 23 March, while playing for the Venezuelan national team against Peru, Martínez injured his left quadricep. After more than two months of recuperation, he returned to action only to be injured again over the summer. Upon his return from the second injury, he scored hat tricks in two consecutive games against the New England Revolution and Orlando City, and was named the MLS Player of the Month for September 2017. Atlanta United finished in a tie for third in the Eastern Conference, but were eliminated in the first round of the MLS Cup Playoffs by Columbus Crew. Despite only making 20 appearances (all competitions) due to injury, Martínez finished his first year in Atlanta fourth in the league in scoring, with 20 goals in all competitions, and was named to the MLS Best XI for the 2017 season.

He was voted the MLS Player of the Month for July after scoring nine goals and adding one assist to lead the Five Stripes to a 3–1–1 record.

He scored the only goal for the MLS All-Stars in the 2018 MLS All-Star Game against Juventus, a 1–1 draw, and was named MVP.

On 24 August 2018, he scored his 28th goal of the season, a game winner in Orlando City, to break the league single-season record of 27, held by Roy Lassiter, Chris Wondolowski, and Bradley Wright-Phillips. After failing to capitalize on numerous opportunities, Martínez utilized his quick footwork to cut back against the defender and then chip Joe Bendik to set the record in just his 26th match. He was named MLS Player of the Month for August 2018.

On 6 August 2019, Martínez was awarded the MLS Player of the Month for July. He earned the award having scored in nine straight matches, tying his own MLS record set the previous season, which was also shared with Diego Valeri.

On 23 August, he set a new MLS record by scoring a goal in 12 consecutive games. The goal helped his side to a 1–0 win over rivals Orlando and was his 15th strike during the streak. On 18 September, Martínez extended his goal-scoring record to 15 consecutive games, which is the third longest streak in world football after Lionel Messi (33 goals in 21 games) and Tor Henning Hamre (21 goals in 15 games).

On April 6, 2021, Martínez made his first appearance for Atlanta United since tearing his ACL. He scored his first goal of the season on May 9, against Inter Miami CF. 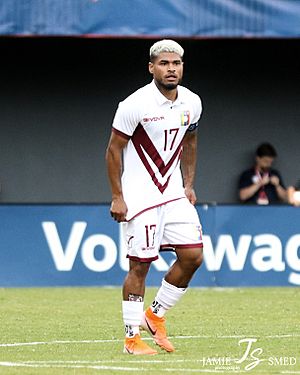 Martínez playing for Venezuela in 2019.

Martínez made his international debut on 7 August 2011 against El Salvador as a substitute in the 76th minute.

Primarily a forward, Martínez is a diminutive yet aggressive and powerful player, who usually plays in a central role as a main striker, but who is also capable of playing as a winger. His pace, dribbling ability, eye for goal, and his accurate finishing ability with either foot, as well as his head, combined with his ability to make attacking runs off the ball from behind and get into good positions, make him a dangerous attacking threat in the penalty area.

All content from Kiddle encyclopedia articles (including the article images and facts) can be freely used under Attribution-ShareAlike license, unless stated otherwise. Cite this article:
Josef Martínez Facts for Kids. Kiddle Encyclopedia.