The Colorado Rapids are an American soccer team that plays in Major League Soccer. They are one of the founding clubs of the MLS. The hometown of Rapids is Denver, Colorado. The club was formed in 1996. 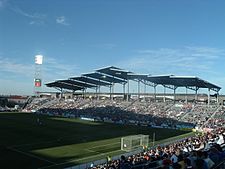 The Rapids play their home games at Dick's Sporting Goods Park in Commerce City, Colorado (ca. 8 miles north of the center of Denver). The stadium capacity is 19,680 and cost $131 million to construct. It is a stadium for football only. The soccer stadium opened on April 7, 2007. Before moving to DSG Park in 2007, Colorado Rapids shared Mile High Stadium and then Invesco Field at Mile High with the Denver Broncos an American football team.

Note: MLS did not allow ties prior to the 2000 season as games were decided by shootout when tied at full-time.

All content from Kiddle encyclopedia articles (including the article images and facts) can be freely used under Attribution-ShareAlike license, unless stated otherwise. Cite this article:
Colorado Rapids Facts for Kids. Kiddle Encyclopedia.