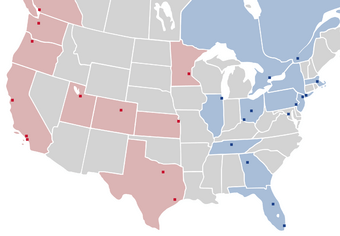 ^ – MLS did not have draws until the 2000 season.
† – The LA Galaxy were declared winners of the Western Division in 2001 after the September 11, 2001 terrorist attacks forced the cancellation of the rest of the regular season. The MLS Cup Playoffs began on September 20.

All content from Kiddle encyclopedia articles (including the article images and facts) can be freely used under Attribution-ShareAlike license, unless stated otherwise. Cite this article:
Western Conference (MLS) Facts for Kids. Kiddle Encyclopedia.