BC Place facts for kids 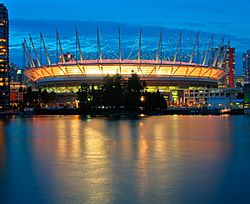 BC Place is a sports stadium in Vancouver, British Columbia. The arena opened on June 19, 1983, and is the current home to the BC Lions of the Canadian Football League and the Vancouver Whitecaps FC of Major League Soccer.

The stadium was originally built for the Expo 86 which was held in Vancouver. Until May 4, 2010, the stadium was the world's largest air-supported domed stadium. It was deflated and replaced with a retractable roof. The Vancouver Whitecaps of the North American Soccer League played in the arena from 1983 to 1984. There have been 8 Grey Cup championship games held in BC Place in 1983, 1986, 1987, 1990, 1994, 1999, 2005, and 2011. The Vancouver Nighthawks of the World Basketball League played in the stadium for their 1988 season.

All content from Kiddle encyclopedia articles (including the article images and facts) can be freely used under Attribution-ShareAlike license, unless stated otherwise. Cite this article:
BC Place Facts for Kids. Kiddle Encyclopedia.