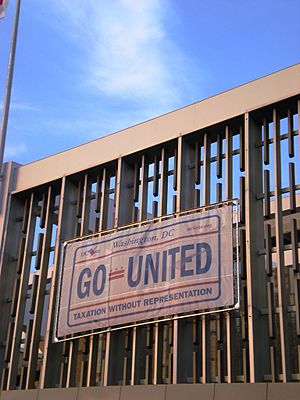 A banner for D.C. United hanging outside the stadium shaped like the Washington, D.C. license plate.

Robert F. Kennedy Memorial Stadium is a sports and live music stadium in Washington, D.C.. It was originally called "D.C. Stadium". In 1969 it was renamed after US Senator Robert F. Kennedy. The D.C. United soccer team plays there. In the past, the stadium was also the home of the Washington Redskins football team, and the Washington Senators and Washington Nationals baseball teams.

All content from Kiddle encyclopedia articles (including the article images and facts) can be freely used under Attribution-ShareAlike license, unless stated otherwise. Cite this article:
Robert F. Kennedy Memorial Stadium Facts for Kids. Kiddle Encyclopedia.