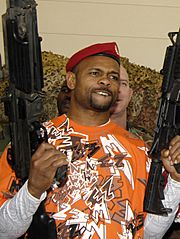 Roy Jones, Jr. (born January 16, 1969) is a American professional boxer and is the current NABO and IBC light heavyweight champion and has also captured IBF championships in the middleweight, super middleweight and light heavyweight divisions. He has also started a rap career in 2001 releasing his first album entitled Round One: The Album and his debut single You all Must've Forgot. He formed a group in 2004 called Body Head Bangerz and released an album with them entitled Body Head Bangerz: Volume One which featured B.G., Juvenile, Bun B of UGK, Petey Pablo, Lil' Flip, and Mike Jones including others.

He has an upcoming fight against Mike Tyson on September 12, 2020.

All content from Kiddle encyclopedia articles (including the article images and facts) can be freely used under Attribution-ShareAlike license, unless stated otherwise. Cite this article:
Roy Jones Jr. Facts for Kids. Kiddle Encyclopedia.