Auburn is bordered by the cities of Federal Way, Pacific, and Algona to the west, Sumner to the south, Kent to the north, and unincorporated King County to the east. The Muckleshoot Indian Reservation is in or near the southern city limits.

Auburn was originally incorporated as Slaughter, Washington after Lt. William Slaughter, who died in a skirmish fighting Native Americans which are now apart of the modern day Muckleshoot tribe in 1855. At the time, the main hotel in town was called the "Slaughter House." In 1893, a large group of settlers from Auburn, New York, moved to Slaughter, and renamed the town to "Auburn." Due to this history, when Auburn was building its second high school in the mid-1990s, there was a grass-roots effort to name the high school "Slaughter High School," but it was eventually decided that the name would be "Auburn Riverside High School," whose mascots are the Ravens.

There are several locations in and around Auburn on the National and State Registers of Historic Places including the Neely Mansion. 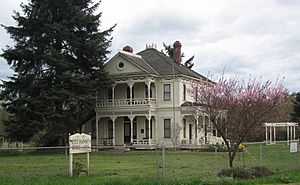 The city of Auburn, located 28 miles (45 km) south of Seattle, Washington, was home to some of the earliest settlers in King County. Nestled in a fertile river valley, Auburn has been both a farm community and a center of business and industry for more than 150 years. Auburn is located near the original confluence of the Green and White rivers, both of which contain runoff water from the Cascade Mountain range. The valley was originally the home of the Skopamish, Smalhkamish, and Stkamish Indian tribes. The first white men in the region were explorers and traders who arrived in the 1830s.

Settlers first came to the valley in the 1850s. In November, a military unit led by Lieutenant William Slaughter camped near what is now present-day Auburn.

A new treaty was written which provided the establishment of the Muckleshoot reservation, which is the only Indian reservation now within the boundaries of King County. The White River tribes collectively became known as the Muckleshoot tribe.

White settlers, the Neely and Ballard families began returning to the area. In 1891, the town of Slaughter incorporated. Although many older citizens considered the town's name as a memorial, many newer residents understandably felt uncomfortable with it. Within two years, the town was renamed Auburn, taken from the first line of Oliver Goldsmith's poem, The Deserted Village: "Sweet Auburn! Loveliest village of the plain."

Auburn had been a bustling center for hop farming until 1890 when the crops were destroyed by aphids. After that, the farms were mostly dairy farms and berry farms. Nevertheless, flooding was still a problem for Auburn farmers up until the Howard A. Hanson Dam was opened in 1962. This dam on the Green River, along with the Mud Mountain Dam on the White River, provided controlled river management, which left the valley nearly flood-free and opened up the rich bottom lands for industrial development.

Another impetus to Auburn's growth was the railroad. The Northern Pacific Railway's subsidiary the Northern Pacific and Puget Sound Shore Railroad opened a line from approximately Puyallup, Washington, through to Seattle, Washington, in 1882. The Seattle-Tacoma Interurban line that allowed easy access to both cities starting in 1902. The railroad, along with better roads, caused many new companies to set up business in Auburn, among them the Borden Condensery (which made Borden's Condensed Milk) and the Northern Clay Company.

Through the twentieth century Auburn grew like many American towns. Many young men went off to fight in the First World War, which was followed by the great influenza epidemic. The 1920s were prosperous for citizens, but the Great Depression of the 1930s left many in need. World War II brought great hardship to many local Japanese-American farmers when they were moved to internment camps and their land taken from them. At the same time, local boys were sent to fight in the Pacific, North Africa, and Europe. Many were wounded and some died in battle.

The post-war era was prosperous to Auburn, bringing more businesses and a community college to the city. In 1963, the Boeing Company built a large facility to mill sheet metal skin for jet airliners. As time went on, many farms disappeared as the land was converted to industrial use. In 1995, The SuperMall of the Great Northwest was built in the valley, bringing in consumers from all over the Puget Sound region.

Much of the city's transition from agricultural small town to industrial and suburban development remains. A monument in the memory of Lieutenant Slaughter, erected in 1918, still stands in a local park. The Neely Mansion, built by the son of a pioneer in 1891, has been refurbished and is listed on the National Register of Historic Places. Auburn's downtown still maintains a "Main Street U.S.A." appearance.

In 2008, Auburn nearly doubled its population by annexing the West Hill and Lea Hill neighborhoods of unincorporated King County.

Two rivers, the White River and, to a greater extent, the Green River flow through Auburn.

Historically, the Stuck River ran through the settlement of Stuck, which is now a small pocket of unincorporated King County within southern Auburn. In 1906, the flow of the White River was diverted into the Stuck's channel near today's Game Farm Park. References to the Stuck River still appear in some property legal descriptions and place names, e.g. Stuck River Drive, within Auburn, but today it is essentially indistinguishable from the southern White River.

Auburn has an extensive system of parks, open space and urban trails consisting of 28 developed parks, over 23 miles of trails (including Auburn's 4.5 mile portion of the Interurban Trail for bikers, walkers, runners and skaters), and almost 247 acres of open space for passive and active recreation.

The Auburn Environmental Park (AEP) is an innovative project that seeks to create a regionally significant open space in an urbanized area that offers opportunities for wetland ecosystem restoration, fish and wildlife enhancement, water quality improvement, economic development, stormwater detention and flood control, public education, and recreation. The AEP is an approximately 120-acre area that is bounded by 15th Street NW to the north, the Interurban Trail to the east, West Main Street to the south and State Route 167 to the west.

Auburn (Sounder station) located downtown is a major hub for the Green River Valley, also home to the Auburn International Farmers Market which is held on Sundays.

Auburn has many large roads nearby and within city limits, including Washington State Route 167 commonly referred as the "Valley Freeway," and Washington State Route 18. Auburn also has its own Transit Center, Auburn (Sounder station) in downtown, making it a central gateway key to access with Sound Transit to the entire Puget Sound area. Sound Transit buses connect the Auburn Transit Center directly to the Federal Way, Sumner, & Kent Transit Centers, while King County Metro buses connect the Transit Center to Green River Community College, the Super Mall, and Auburn Way.

Sounder Transit Rail allows the commuter to get to Downtown Seattle in 25 minutes or less, and to Hwy 512 S. of Tacoma in less than 35 minutes, bypassing the rush-hour gridlock of the area's streets and highways.

Until 1987 Auburn was also the home for a steam locomotive roundhouse and diesel engine house of the Northern Pacific Railway, the BNSF Railway of today. BNSF maintains a rail yard and small car repair facility, along with maintenance-of-way facilities at the former NP yard. In addition, the Auburn Municipal Airport serves the general aviation community.

There were 26,058 households of which 36.2% had children under the age of 18 living with them, 46.7% were married couples living together, 13.0% had a female householder with no husband present, 5.9% had a male householder with no wife present, and 34.3% were non-families. 25.6% of all households were made up of individuals and 7.9% had someone living alone who was 65 years of age or older. The average household size was 2.67 and the average family size was 3.22.

There were 16,108 households out of which 32.8 percent had children under the age of eighteen living with them, 43.7 percent were married couples living together, 13.4 percent had a female householder with no husband present, and 37.6 percent were non-families. 29.1 percent of all households were made up of individuals and 9.1 percent had someone living alone who was 65 years of age or older. The average household size was 2.47 and the average family size was 3.05. 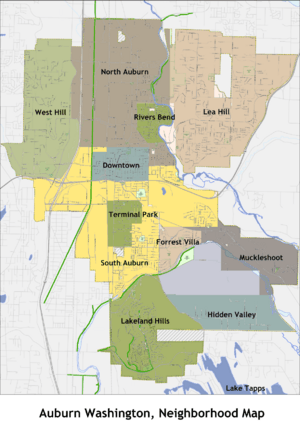 The Outlet Collection Seattle, formerly SuperMall of the Great Northwest, is an outlet mall which opened in 1995.

Muckleshoot Casino & Bingo, commonly known for its slogan, "The Biggest and Best in the Northwest!" is a Native American-run casino, located on the Muckleshoot Reservation. In addition to being one of the largest casinos in the Pacific Northwest, it is one of the few left in the state that allows smoking. All money made in the casino directly benefits the Muckleshoot Tribal Community, providing education and low-cost health care for tribal residents and the Auburn Community and others through charitable donations.

Washington’s only Class One thoroughbred racetrack. A 167-acre (0.68 km2) facility. Emerald Downs' six-level stadium is focused on the finish line. The racetrack is professionally operated on land purchased by the Muckleshoot in 2002.

The White River Valley Museum’s exhibits feature Auburn, from Native American history to the 1920s. They focus on the Muckleshoot Indian Tribe, pioneer life, immigration from Europe and Japan, truck farming, railroading and the building of towns throughout the area. Visitors can visit a recreation of a pioneer cabin, climb aboard a Northern Pacific Railway caboose, and investigate a recreation of the shops in 1924 downtown Auburn.

The White River Amphitheater is a 20,000-seat venue, located about 3 miles east of the city limits

Auburn has an extensive system of parks, open space and urban trails: 28 developed parks, over 23 miles of trails (including Auburn's 4.5 mile portion of the Inter-urban Trail for bikers, walkers, runners and skaters), and almost 247 acres of open space for passive and active recreation. The City of Auburn also offers a variety of cultural arts programming for performing arts, visual arts, public art, special events and more! And the City's recreation division provides opportunities for the public to participate in diverse recreational programs and activities. These programs include preschool, youth, teen, and adult leisure programs; youth, teen, and adult athletics; fitness and wellness programs; programs designed to provide social and recreational opportunities to senior citizens and those with special needs, and a host of special events suitable for the entire family and community at large. The recreation division also offers a gymnasium for open gym and organized activities, and several options for facility rentals, including buildings, picnic shelters, and fields.

The City of Auburn has designated the following landmarks:

Auburn has five sister cities -- Kent, Washington, neighboring them to the north, and Tamba, a city in the Hyōgo prefecture of Japan. The three cities participate in an annual student exchange program, as well as a summer Youth Ambassador program, and "official governmental, people-to-people, recreational, cultural, and business exchanges." The Other cities are Pyeongchang, Korea, which Auburn has a friendship exchange agreement with, and Guanghan, China, Sichuan Province in which Auburn also has a friendship exchange. In 2012 the city of Auburn established a formal sister cities agreement with Mola di Bari, Italy

All content from Kiddle encyclopedia articles (including the article images and facts) can be freely used under Attribution-ShareAlike license, unless stated otherwise. Cite this article:
Auburn, Washington Facts for Kids. Kiddle Encyclopedia.