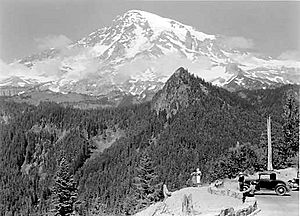 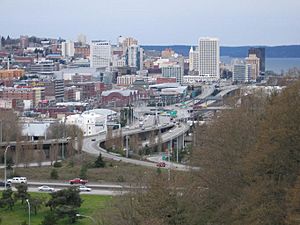 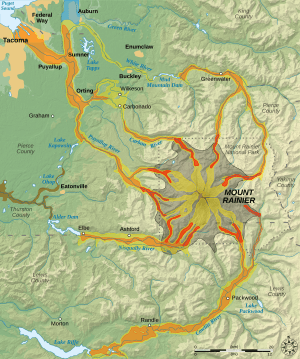 Pierce County is a county in the U.S. state of Washington. As of the 2010 Census, the population was 795,225, making it the second-most populous county in Washington, behind King County, and the 61st-most populous in the United States. The county seat and largest city is Tacoma. Formed out of Thurston County on December 22, 1852, by the legislature of Oregon Territory, it was named for U.S. President Franklin Pierce. Pierce County is in the Seattle metropolitan area (formally the Seattle-Tacoma-Bellevue, WA, metropolitan statistical area).

Pierce County is home to Mount Rainier, the tallest mountain and a volcano in the Cascade Range. Its most recent recorded eruption was between 1820 and 1854. There is no imminent risk of eruption, but geologists expect that the volcano will erupt again. If this should happen, parts of Pierce County and the Puyallup Valley would be at risk from lahars, lava, or pyroclastic flows. The Mount Rainier Volcano Lahar Warning System was established in 1998 to assist in the evacuation of the Puyallup River valley in case of eruption.

The Port of Tacoma is the sixth busiest container port in North America, and one of the 25 busiest in the world, and it plays an important part in the local economy. This deep-water port covers 2,400 acres (9.7 km²) and offers a combination of facilities and services including 34 deepwater berths, two million square feet (190,000 m²) of warehouse and office space, and 131 acres (530,000 m²) of industrial yard. One economic impact study showed that more the 28,000 jobs in Pierce County are related to the Port activities.

There are several good city guides to the arts and culture scene: Travel Tacoma + Pierce County, Exit 133, TakePartInArt.org, and FeedTacoma.com are among the most popular.

The largest public employer in Piece County is Joint Base Lewis–McChord, which contributes about 60,000 military and civilian jobs. The largest private employers are MultiCare Health System and CHI Franciscan Health, which operate the two largest hospitals in the county.

The following is a list of all sixteen public school districts in Pierce County, Washington:

The largest institutions of higher education are University of Puget Sound in Tacoma and Pacific Lutheran University in Parkland. Both are religiously affiliated private universities.

The Pierce County Library is the fourth largest library system in the state. There are currently 20 branches, including:

All content from Kiddle encyclopedia articles (including the article images and facts) can be freely used under Attribution-ShareAlike license, unless stated otherwise. Cite this article:
Pierce County, Washington Facts for Kids. Kiddle Encyclopedia.