Buckley is a city in Pierce County, Washington, United States, founded in 1882. The population was 5,114 at the 2020 census, up from 4,354 in 2010. Buckley sits below Mount Rainier and is well known for hosting the annual Log Show.

According to the Köppen Climate Classification system, Buckley has a warm-summer Mediterranean climate, abbreviated "Csb" on climate maps. 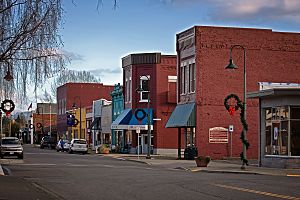 Of the members of Buckley 25 years or older, 80.7% have completed a high school education or higher, while 14.8% have completed a minimum of a bachelor's degree. 4.4% have earned a graduate or professional degree, and the unemployed rate sat at 6.9%. 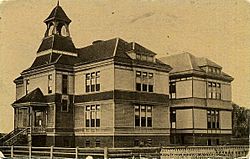 All content from Kiddle encyclopedia articles (including the article images and facts) can be freely used under Attribution-ShareAlike license, unless stated otherwise. Cite this article:
Buckley, Washington Facts for Kids. Kiddle Encyclopedia.