Fife is a city in Pierce County, Washington, United States and a suburb of Tacoma. The population was 10,999 at the 2020 census, up from 9,018 in 2010. Fife is contained within the Puyallup Indian Reservation.

In 1940, it was described as "Fife...at a valley crossroads in the midst of a thickly settled berry growing and truck-gardening district is represented by a string of markets, taverns, shops, and a large, balloon-roofed dance hall along the highway." The 1940 population was 135. Fife was officially incorporated on February 11, 1957.

Due to the increased traffic volume traveling from Puyallup and Tacoma, Fife felt the need to establish itself as autonomous community, not just as an intermediate area between Interstate 5 (I-5) and State Route 167.

Fife may have been named for William J. Fife, a prominent Tacoma lawyer, Yukon prospector, once head of the Washington National Guard, and a lieutenant colonel in the field during the Philippine Insurrection.

Fife is also a tideflat community, residing in the low, flat area extending from the Port of Tacoma. This means the water table occurs only 10–15 feet below ground in some parts. Consequently, during the day as the tide rises and falls in the Puget Sound, so do parts of land slightly rise and fall.

The southern portions of the city are in the floodplain of the Puyallup River. Much of the city would be damaged or destroyed in the event of a lahar due to an eruption of Mount Rainier.

Fife, an eastern suburb of Tacoma, consists primarily of businesses such as car dealerships, warehousing and industrial facilities, motels, drive through smokeshops, quick-dining restaurants as well as an Indian casino and various other highway-side businesses. Its proximity to the Port of Tacoma, Interstate 5, and Highway 167 has contributed to the large number of freight forwarding companies. Fife's tax base is made up of sales tax, utility tax, and property tax. Fife Heights, located on a hill beyond the incorporated bounds of the city, is a primarily residential area. Milton is located immediately to the east and Edgewood to the southeast. 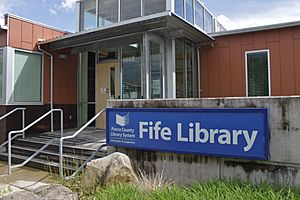 The Fife Public Schools serve both the cities of Fife and Milton, as well as pockets of Edgewood, and Federal Way. Fife has one high school, Fife High School.

All content from Kiddle encyclopedia articles (including the article images and facts) can be freely used under Attribution-ShareAlike license, unless stated otherwise. Cite this article:
Fife, Washington Facts for Kids. Kiddle Encyclopedia.