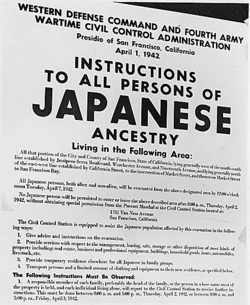 Executive Order 9066 was a presidential executive order. It was signed and issued during World War II by the President of the United States Franklin D. Roosevelt on February 19, 1942, authorizing the Secretary of War to prescribe certain areas as military zones. The order cleared the way for the deportation of Japanese Americans to internment camps. As a result, tens of thousands of Japanese Americans and Japanese nationals were interned during the war. The same order was also applied to numbers of American residents of Italian or German descent.

President Franklin Roosevelt issued the order on February 19, 1942. It ordered the evacuation of all persons who could be considered a threat to national security from the West Coast to relocation centers further inland. Over 100,000 Japanese American men, women and children were moved to assembly areas. From there they were moved to camps which were isolated and guarded.

In part, the order read:

Now, therefore, by virtue of the authority vested in me as President of the United States, and Commander in Chief of the Army and Navy, I hereby authorize and direct the Secretary of War, and the Military Commanders whom he may from time to time designate, whenever he or any designated Commander deems such action necessary or desirable, to prescribe military areas in such places and of such extent as he or the appropriate Military Commander may determine, from which any or all persons may be excluded, and with respect to which, the right of any person to enter, remain in, or leave shall be subject to whatever restrictions the Secretary of War or the appropriate Military Commander may impose in his discretion. The Secretary of War is hereby authorized to provide for residents of any such area who are excluded therefrom, such transportation, food, shelter, and other accommodations as may be necessary, in the judgment of the Secretary of War or the said Military Commander, and until other arrangements are made, to accomplish the purpose of this order. The designation of military areas in any region or locality shall supersede designations of prohibited and restricted areas by the Attorney General under the Proclamations of December 7 and 8, 1941, and shall supersede the responsibility and authority of the Attorney General under the said Proclamations in respect of such prohibited and restricted areas...

All content from Kiddle encyclopedia articles (including the article images and facts) can be freely used under Attribution-ShareAlike license, unless stated otherwise. Cite this article:
Executive Order 9066 Facts for Kids. Kiddle Encyclopedia.