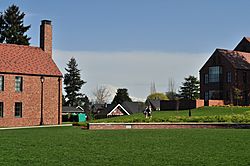 Mount Rainier seen from the University of Puget Sound

The University of Puget Sound (Puget Sound) is a private liberal arts college in Tacoma, Washington, United States. It offers Bachelor's, Master's and doctorate degrees. The college draws approximately 2,600 students from 44 states and 16 countries. It offers 1,200 courses each year in more than 50 areas of study. In 2012 Puget Sound was named one of 40 schools in the guide Colleges That Change Lives: 40 Schools That Will Change the Way You Think About Colleges. It has ties to The United Methodist Church. But the college is no longer officially affiliated with the church. The board of trustees is independently elected.

All content from Kiddle encyclopedia articles (including the article images and facts) can be freely used under Attribution-ShareAlike license, unless stated otherwise. Cite this article:
University of Puget Sound Facts for Kids. Kiddle Encyclopedia.