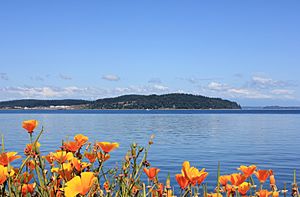 A view of Anderson Island and the Puget Sound from Steilacoom, Washington. 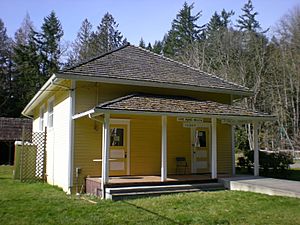 Anderson Island has a land area of 7.75 square miles (20.1 km2), and reported a population of 1,037 persons as of the 2010 census. The island had been a retirement destination since the late 1960s, with a median age of 54 years (for comparison, the median age of Washington state as a whole is 37 years). The population booms every summer to approximately 4,000. The Island is also home to a sizable population of deer. 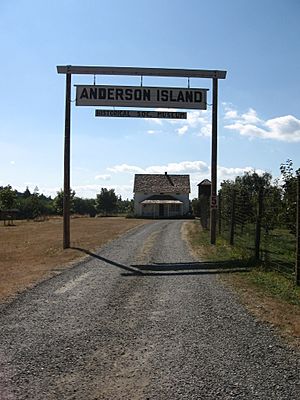 A farm on Anderson Island 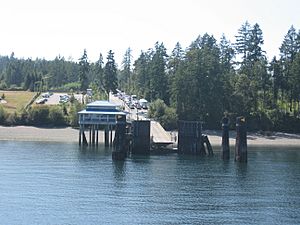 The island was named in 1841 by Charles Wilkes of the United States Exploring Expedition. Given a warm reception at Fort Nisqually by Mr. Anderson and Captain McNeill, and assistance to aid his operations, Wilkes repaid their kindness by naming the two nearby islands after these two men.

In 1870, Andrew N. Christensen, a Dane, and his brother, Christian F. Christensen, were the first European settlers to stay at the island. Andrew's wife had a strong hand in the development of the island community. Christian was the only Christensen brother to reside permanently on Anderson Island. The primary industry was the sale of wood to the wood-burning steamers that came into Amsterdam Bay. Other early industries included brick making, farming and fishing.

The only General Store on the island is run by Dr. and Mrs. Lake of Steilacoom.

In 2004, National Recreational Properties, Inc. of Irvine, California purchased more than 400 vacant lots on the island, paying roughly $4,000 to $7,000 per lot. They created an infomercial and sold to out-of-state investors, mostly from California. Residents speculated that the lots would be sold for about $25,000. Eventually more than 300 lots were sold, most selling for over $40,000.

Accessible only by ferry or private boat, Anderson Island is served by the Steilacoom / Anderson Island / Ketron Island run, the only ferry run belonging to Pierce County. The ferry Steilacoom II was put into service in January 2007 to work with the aging ferry Christine Anderson. The ferry runs many times per day, starting at 5:45 in the morning, and going to 10:30 pm on Fridays, Saturdays and Sundays (8:00 pm other nights).

All content from Kiddle encyclopedia articles (including the article images and facts) can be freely used under Attribution-ShareAlike license, unless stated otherwise. Cite this article:
Anderson Island (Washington) Facts for Kids. Kiddle Encyclopedia.