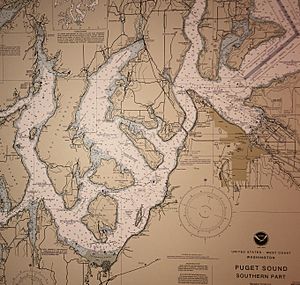 The Key Peninsula lies at the heart of South Puget Sound.

The Key Peninsula ("The KP" or "The Key" to some locals) is a finger of land in Puget Sound, Washington, United States. It is approximately 16 miles (26 km) long and extends south from the Kitsap Peninsula. It is part of Pierce County, Washington. Some of its towns include: Wauna, Key Center, Vaughn, Home, Lakebay, and Longbranch. Its name is derived from the key-like shape of the peninsula.

From the 1870s to the 1920s, transportation needs for communities on the western side of the Key Peninsula along Case Inlet were once served by a small flotilla of steamboats.

The local newspaper is the monthly community nonprofit Key Peninsula News, founded in 1974 and based in Vaughn: http://www.keypennews.com.

All content from Kiddle encyclopedia articles (including the article images and facts) can be freely used under Attribution-ShareAlike license, unless stated otherwise. Cite this article:
Key Peninsula Facts for Kids. Kiddle Encyclopedia.