South Hill is a census-designated place (CDP) in Pierce County, Washington, immediately south of Puyallup. The population was 52,431 at time of the 2010 census. The name describes the area's location above the south side of the Puyallup River valley. This also contrasts with the nearby Edgewood and Milton areas, which are known informally as North Hill.

The area was first settled in the 1880s after a military road was built through the area in the 1850s. Several logging camps, farms, and hunting grounds sprouted up as the area was settled. It also was the main route to the towns of Kapowsin and Eatonville (Meridian Avenue or SR 161). Population growth was slow until after World War II, when roads improved and people could commute to nearby Tacoma, Fort Lewis, and Seattle.

Meridian Habitat Park & Community Center is a 36-acre park located on State Route 161. The site was previously an amphitheatre owned by Champion Center Church and home to the annual Jesus of Nazareth passion play from 1982 to 2006. The church sold the amphitheatre to Pierce County for $6.9 million in 2006, but the stage caught fire and was destroyed by an electric fire in 2007.

Bradley Lake Park and Wildwood Park are within the city limits of Puyallup. 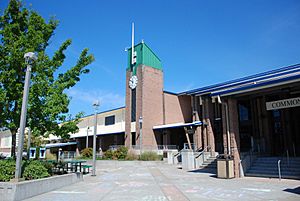 All content from Kiddle encyclopedia articles (including the article images and facts) can be freely used under Attribution-ShareAlike license, unless stated otherwise. Cite this article:
South Hill, Washington Facts for Kids. Kiddle Encyclopedia.