Orting is a city in Pierce County, Washington, United States. The population as of the 2010 census is 6,746, according to the City of Orting.

Orting is a very small city located approximately 30 miles (48 km) from Mount Rainier. The first ever recorded claims for the land in Orting were made in 1854 by William Henry Whitesell (also the first postmaster), Thomas Headley, Daniel Lane and Daniel Varner. These 4 people all have streets in the city named after them, plus a monument in the Orting City Park commemorating them. The city was officially incorporated on April 22, 1889. Early growth came as the area developed fields to grow hops, produce, and logging industries. Later Christmas tree and bulb farms became important to the local economy. Orting was also a supply town for the coal mining towns of Wilkeson and Carbonado. The first railroad in the city was built in 1877 by the Northern Pacific Railway. It was called "Whitesell's Crossing" because the railroad ran right through the Whitesell property. Population rose quickly after this railroad was built, as it made transportation in and out of the city much easier. What's left of the railroad is now the Meeker Southern Railroad which runs between Puyallup and McMillin.

On November 7, 2006, there was a flash flood in Orting. At around 8:00 AM on November 7, 2006, the neighborhood Village Green in Orting flooded. It took only about 2 hours for the water to be as high as halfway up some houses. This flood was part of the major Pineapple Express flooding which devastated many parts of Western Washington. The cause of the Orting Flood has been debated. Some people say the sewers could not handle the 2 days of continuous rain leading up to the flood. Others say that the levees on the Puyallup River broke. But because of the Pineapple Express, the freezing and snow levels on Mount Rainier rose too fast, and the snow started to melt. The Orting School District closed all of Orting's schools for 2 days due to the massive clean up that was needed. Both the Carbon River and the Puyallup River were responsible for this flooding, due to the city of Orting being surrounded by these two rivers.

There were 2,184 households of which 48.4% had children under the age of 18 living with them, 59.5% were married couples living together, 11.5% had a female householder with no husband present, 6.3% had a male householder with no wife present, and 22.7% were non-families. 16.5% of all households were made up of individuals and 5.8% had someone living alone who was 65 years of age or older. The average household size was 3.01 and the average family size was 3.34.

Orting is nestled between the Carbon and Puyallup Rivers. The Voights Creek Hatchery is located just outside Orting and plays a large part in the healthy runs of salmon that bring fishermen from far and wide to enjoy the challenge of landing a big salmon.

Orting is home to the beautiful historic buildings and park like grounds that facilitate all levels of care and housing for soldiers. The soldiers cemetery, on the hill just above the Soldiers Home, having an abundance of Historical knowledge. Gravestones for soldiers dating back to service in the Civil War. The Soldiers Home is located on the Orting Kapowsin Hwy and can be reached by leaving Orting on Calistoga and heading toward Graham where it can be found at the base of the hill.

Orting is known for its beautiful parks filled with huge shade trees making places for picnics and relaxing right in the center of the historic downtown area. Visitors will enjoy the Orting Valley Farmer's Market in the North Park, Fridays from 3pm-7pm, during the summer months. A walking tour map is available at the library on the corner of Train and Washington. The map shows the route to the historic murals scattered on buildings throughout the town. Throughout town there are views of Mt. Rainier in the distance.

Every year, Orting is the fourth and final stop in the annual Daffodil Festival Parade. The parade has gone through downtown Orting since 1934. It draws over 10,000 people in early April to the festivities in the downtown Orting Parks and the parade viewing in late afternoon. The parade also goes through the cities of Tacoma, Puyallup, and Sumner. Orting school band also plays. 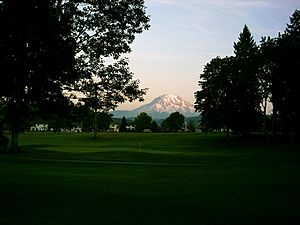 Mount Rainier as seen from the High Cedars Golf Course in Orting, bordering the Puyallup River

The town sits in a fertile valley between two major rivers, the Carbon and Puyallup Rivers, and it is built entirely on several layers of lahar deposits. Based on past lahar flow and the structure of Mount Rainier, Orting has been designated the most at-risk town in the event of lahar activity from the mountain. Scientists predict that lahars could reach Orting in as little as 30 minutes from origin. Authorities have installed a system of lahar sirens throughout the area, activated by sensors on Mt. Rainier. The local schools regularly stage lahar evacuation drills, and residents have been informed as to lahar escape routes. Local citizens are progressing toward designing the Bridge for Kids, a walking bridge across the Carbon River that could be used for recreation and rapid evacuation up the hill toward Cascadia, Washington.

The primary way of reaching the city is by car via Washington State Route 162. The closest Sounder Commuter Rail station is in Sumner, WA.

The Foothills Trail is a paved trail built on the old railroad bed. It runs through Orting, to South Prairie in one direction and to Sumner in the other. Its primary function is recreation, however it is also utilized by many commuters on bicycles. The trail is for walking, bicycling, horseback riding, skating and skateboarding and scooter traffic. It is set aside for nonmotorized vehicles only.

All content from Kiddle encyclopedia articles (including the article images and facts) can be freely used under Attribution-ShareAlike license, unless stated otherwise. Cite this article:
Orting, Washington Facts for Kids. Kiddle Encyclopedia.