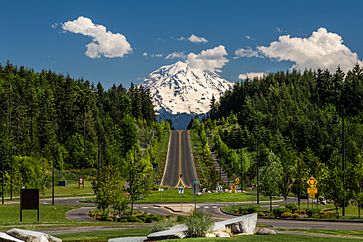 View of Mount Rainier from The Post at Tehaleh.

Tehaleh, formerly known as Cascadia, is a master-planned unincorporated community to the south of Bonney Lake in Pierce County, Washington, United States. Construction began in 2005 with an estimated timeline for completion of 20 years. The town was designed by Patrick Kuo, who had purchased the land in 1991. Included in the original plan for Cascadia were 6,500 homes, a commercial district, an industrial park, schools, and recreational parkland for residents to enjoy. Construction halted in 2008, prior to the construction of any homes or commercial properties. After foreclosure proceedings in 2010, Homestreet Bank repossessed much of Kuo's land, intending to find another developer.

In October 2009, Cascadia Project LLC, the company behind the planning of Cascadia, filed for Chapter 11 bankruptcy protection. According to HomeStreet Bank, which financed the project, over 72 million dollars of loans were non-performing. HomeStreet Bank had planned to foreclose and auction off the land of the community, which had been running behind schedule with only a school and some road-related infrastructure completed. The bankruptcy restructuring plan proposed by Cascadia Project LLC was rejected by the U.S. Bankruptcy Court, and HomeStreet Bank completed foreclosure of the land and held an auction September 24, 2010. As there were no qualified bidders, the property reverted to HomeStreet Bank ownership. Following the auction HomeStreet Bank intended to find another developer for the community.

Newland Communities and North American Sekisui House salvaged the project in 2011 by purchasing 4,200 of the original 5,000 acres of land for 49 million dollars. The development was renamed Tehaleh, derived from words meaning “highlands” or “the land above”. The revised plan calls for constructing 5,900 houses and 4 million square feet of business property within the next 25 years. The plan also retains the many parks and trails included in the failed Cascadia project. On 26 September 2012, Tehaleh opened its first ten model houses.

Due to its elevated geography on a plateau, several hundred feet above the adjacent Puyallup River valley, Tehaleh is not at risk of flooding from the Puyallup River unlike many communities in close proximity to Mount Rainier. In the event of an eruption of Mount Rainier, Tehaleh is not within the USGS delineated mudslides hazard zone. Because of its elevation and location outside of the lahar inundation zone, a project has been proposed to construct a bridge from Orting to Tehaleh, called Bridge for Kids, to provide Orting residents an additional evacuation route to the high ground on Tehaleh, in case of emergency.

The Mantel, is a private dining establishment set within Seven Summits Lodge in the Trilogy, a 55+ community within Tehaleh. The Mantel is a members-only establishment that is not open to the general public. A limited number of annual dining memberships are made available each year.

The cafe is located within The Post, Tehaleh's community center.

The Post is the main (and currently the only) community and information center in Tehaleh. The office within The Post is staffed by Newland Communities. Residents and visitors stop by to relax or get information about the community. 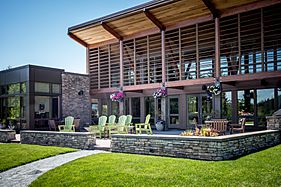 Tehaleh master plan includes 1,800 acres of trails, parks and open space. Currently, there are 11 parks and more than 10 miles of trails with several more parks and trails in the future plan.

All content from Kiddle encyclopedia articles (including the article images and facts) can be freely used under Attribution-ShareAlike license, unless stated otherwise. Cite this article:
Tehaleh, Washington Facts for Kids. Kiddle Encyclopedia.