The former Auburn Post Office building is located in the City of Auburn, 20 Auburn Avenue NE at First Street NE. This is one block north Main Street, the historic business and commercial center. The main entrance is the west face on Auburn Avenue.

The former Post Office is a small, single-purpose building. Constructed in 1937 as a one-story building, 60.66 feet (18.49 m) wide by 83 feet (25 m) long, with a covered loading platform in back. The exterior is red brick on a poured concrete foundation with sandstone trim elements. These include a horizontal band below the cornice, and engaged sandstone piers adjacent to the main entry.

In the center of the front façade are five granite steps flanked by original wrought-iron ornamental lampposts. The wooden double entry doors have a transom windows above and large rectangular windows on either side. The remaining windows are gently arched wood windows with divided lights and poured concrete sills. Each features a soldier course of red brick at the headers.

The roof is a lateral hip, with a metal cupola featuring glass panes and a weathervane. An east-facing skylight with operable windows runs along the base of the hipped roof. The original roof was tile. A raised, covered loading dock was constructed at the rear of the building. A cornerstone on the northwest corner of the front facade provides the names of the architect and the supervising engineer, the Postmaster General, and the Secretary of the Treasury that year.

The building has an L-shaped lobby, 14 feet (4.3 m) wide and 46 feet (14 m) on the front and 32 feet (9.8 m) on the back or south side. The postal clerk's counter and windows ran nearly the length of the lobby with the post box area located at the south end. A full wall with grilled postal clerk windows separated the public and private functions of the post office. Interior finish materials in the lobby area included Alaskan marble wainscoting, mahogany window and door trim, and terrazzo flooring. The building contained 11 rooms, including restrooms, work rooms and Postmaster's office, and a full basement with storage, fuel and boiler rooms. 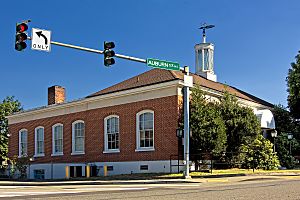 The former Auburn Post Office building was purchased by the King County Department of Public Health and remodeled for use as a health clinic in 1964. The exterior alterations include construction of a 19 feet (5.8 m) long by 22 feet (6.7 m) deep brick addition to the rear covered loading dock; construction of an ADA accessible ramp along the north side leading to a basement entrance; installation of an arched fabric awning over the primary building entrance; and the addition of new building signage. The changes are not visible from the front. The roof has been changed from tile to asphalt shingles but the original cupola still crowns the building.

The building interior was extensively remodeled in 1964. Spaces were sub-divided to create smaller offices and exam rooms, the lobby/reception area was reconfigured as the wall originally separating the post office lobby area from the back-of-the-house was removed and replaced with a reception counter, and the rear addition was added to create a nurse's work room. The buildings interior bears little resemblance to its historic use as a post office.

All content from Kiddle encyclopedia articles (including the article images and facts) can be freely used under Attribution-ShareAlike license, unless stated otherwise. Cite this article:
Auburn Post Office Facts for Kids. Kiddle Encyclopedia.