The Muckleshoot are a Lushootseed Native American tribe, part of the Coast Salish peoples of the Pacific Northwest whose traditional territory and reservations is located in the area of Auburn, Washington, about 15 miles (24 km) northeast of Tacoma and 35 miles (55 km) southeast of Seattle. As federally recognized Muckleshoot Indian Tribe (a post-Treaty construct and not a historic tribe) they are composed of descendants of various tribal groups who inhabited Central Puget Sound and occupied the Green and White River drainages from the rivers' confluence in present-day Auburn to their headwaters in the Cascades:

Traditionally, the Muckleshoots lived along the eastern shores of Washington State's Puget Sound region and the adjacent rivers of the Cascade Range. They spoke Whulshootseed, a local form of Lushootseed; most Muckleshoots today do not speak their ancestral language, but some do and the tribe has an active program for its preservation and resuscitation. 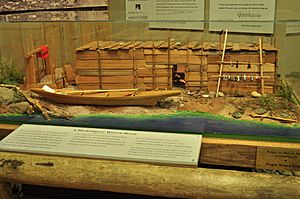 Although they were skilled hunters, salmon fishing was the mainstay of traditional Muckleshoot life. Salmon was gathered and cured, and very often traded with other peoples along the coast and inland. Salmon was treated with reverence, which continues to this day. In the elaborate First Salmon Ceremony, which is still observed, the entire community shares the flesh of a Spring Chinook, then returns its remains to the river where it was caught, so that it can inform the other fish of how well it was received. The other ceremony for the first salmon is to roast it until it is made to ashes. The Muckleshoot toss the bones back into the water or stream they found it in. They believed it would come alive again.

With a seemingly endless supply of food, the Muckleshoots could engage in various crafts, including weaving, wood-carving, and basket-making. A complex social structure also emerged, consisting of a nobility, middle class, and slaves, which were generally captured members of other tribes.

Muckleshoot life changed radically as a result of first encounters with European and American traders and explorers. Lacking immunity to the newcomers' diseases, the population was decimated by the mid-nineteenth century. At the same time, amicable relations with American settlers deteriorated as whites began claiming choice land for themselves. In a last-ditch attempt to stem the tide of white colonization, the Muckleshoots aligned themselves with other local peoples in the Puget Sound Indian War (1855–1856). Upon their defeat, they were forced into a tiny reservation.

Tensions abated only slightly, however, particularly in the wake of rapid population growth in the region. In the 1960s and 1970s, the Muckleshoots engaged in a series of protests, intended at protecting their fragile ecosystem. Known as the Fish Wars, these protests attempted to preserve Muckleshoot fishing rights in the nearby rivers not part of the official reservation. The federal government finally conceded to the protests with the Boldt Decision, which designated the Muckleshoots as co-managers of the King County watershed, with control over fishing and hunting in their "Usual and Accustomed" historical fishing and hunting grounds.

While this improved the tribe's economic standing, the Muckleshoots were soon forced to contend with a sharp decline in the salmon population due to the effects of urbanization and industrialization on the environment. While they continue to fight for the preservation of the ancient salmon runs, the Muckleshoot also found other venues to improve their financial circumstances. Taking advantage of their proximity to Seattle and other urban centers, they opened casino and bingo parlor in Auburn, Washington called Muckleshoot Indian Casino and Muckleshoot Bingo. The earnings have also been used to reacquire lands near the reservation and lay an infrastructure for the benefit of future generations.

The Muckleshoot constitution, adopted in 1936 and ratified in 1941, determined that the tribe would be governed by a Muckleshoot Tribal Council of nine elected members. This Council is subject, in turn, to a General Council, consisting of all members of the tribe.

All content from Kiddle encyclopedia articles (including the article images and facts) can be freely used under Attribution-ShareAlike license, unless stated otherwise. Cite this article:
Muckleshoot Facts for Kids. Kiddle Encyclopedia.