Kids Encyclopedia Facts
This page is about the city. For the airport, see Seattle–Tacoma International Airport. For other uses, see SeaTac.

SeaTac is a city in southern King County, Washington, United States. The city is an inner-ring suburb of Seattle and part of the Seattle metropolitan area. The name "SeaTac" is derived from the Seattle–Tacoma International Airport, itself a portmanteau of Seattle and Tacoma.

The city of SeaTac is 10 square miles (26 km2) in area and has a population of 26,909 according to the 2010 census. The city boundaries surround the Seattle–Tacoma International Airport (approximately 3 square miles (7.8 km2) in area), which is owned and operated by the Port of Seattle. The city includes the communities of Angle Lake, Bow Lake, McMicken Heights and Riverton Heights, which were established before the city's incorporation. Residents voted for incorporation on March 14, 1989, and the city incorporated in February 1990.

In 2014 Gavin Kelly of The Resolution Foundation wrote that "A generation ago SeaTac was what Americans would call a middle-class town. A jet-fueller or baggage handler could earn a decent living."

There were 9,533 households, of which 33.2% had children under the age of 18 living with them, 40.6% were married couples living together, 14.0% had a female householder with no husband present, 7.4% had a male householder with no wife present, and 38.0% were non-families. 28.8% of all households were made up of individuals, and 7.5% had someone living alone who was 65 years of age or older. The average household size was 2.72 and the average family size was 3.38.

Angle Lake Park, a 10.5-acre (42,000 m2) park at Angle Lake, has a barbecue area, a boat launch, a fishing pier, playground equipment, an open recreation area, swimming facilities, a stage, toilet facilities, and a spray park. In the swimming area lifeguards are on duty during the summer months.

Des Moines Creek Trail Park, consisting of 9.6 acres (39,000 m2), has a paved trail for bicyclists and pedestrians; off-street parking spaces are located at the trail head.

The Neighborhood Park at SeaTac Community Center has a half court basketball court a skate park, playground equipment, a picnic area, a climbing boulder, and parking.

The city is served by the Seattle–Tacoma International Airport, located within city limits.

The city is also served by several public transportation services: Link light rail stops at two stations in the city, at SeaTac/Airport station and Angle Lake station; King County Metro operates several bus routes in the area, including the RapidRide A Line on International Boulevard and RapidRide F Line on Southcenter Boulevard; some Sound Transit Express regional bus routes terminate or serve the SeaTac area, primarily the airport and other transit hubs. 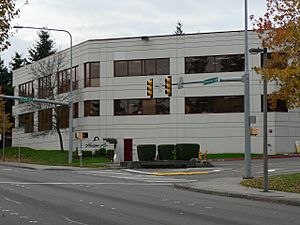 The city is home to over 900 licensed businesses, nearly 80 of which are Fortune 1000 companies. They employ nearly 40,000 employees in the city of SeaTac and generate local sales of approximately $3.7 billion.

Alaska Airlines and Horizon Air are headquartered in the city. Four airlines have operations at 18000 Pacific Highway South (also known as 18000 International Boulevard) in the city, including Asiana Airlines, EVA Air, Hainan Airlines, and China Airlines.

SeaTac's Department of Community and Economic Development was formed in early 2011 to create a one-stop permitting center, increase the level of service and assist in the facilitation of economic development by creating a more cohesive approach to real estate development and job creation. The new department has four divisions: Economic Development, Planning, Engineering Review, and Building Services. In 2013, the City of SeaTac Proposition No. 1 passed with 50.64% of the vote to raise the minimum wage to $15 per hour. 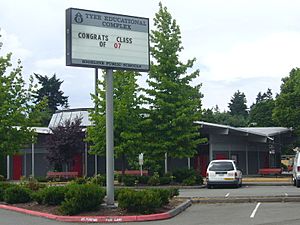 Tyee Educational Complex housing three independent schools: The Academy of Citizenship and Empowerment, and Odyssey: The Essential School. It then has been transformed back to Tyee High School - a single school in the 2017–18 school year.

In 2004, Highline Public Schools reorganized some of its high schools, including Tyee, into having smaller programs on larger campuses.

All content from Kiddle encyclopedia articles (including the article images and facts) can be freely used under Attribution-ShareAlike license, unless stated otherwise. Cite this article:
SeaTac, Washington Facts for Kids. Kiddle Encyclopedia.