Kenworth is an American manufacturer of medium and heavy-duty Class 8 trucks with offices based in Kirkland, Washington, a suburb of Seattle. Kenworth is one of three major truck divisions and brands under parent company Paccar. 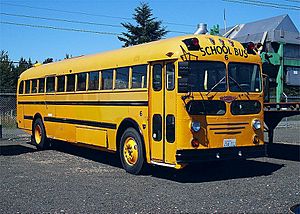 Kenworth was founded in Portland, Oregon in 1912 by brothers George T. and Louis Gerlinger, Jr. as a car and truck dealership known as Gerlinger Motor Car Works. In 1914, they decided to build their own truck with a more powerful inline six-cylinder engine, the first put into a commercial truck. The Gersix, as it was known when introduced in 1915, was framed in structural steel, which along with its power, made the truck ideal for logging in the rugged Northwest. 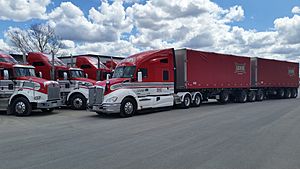 In 1916 the company moved to Tacoma, Washington, where Seattle businessman Edgar K. Worthington was managing his mother's commercial building. He became intrigued by the Gerlinger company, which was doing quite well, or so it seemed, as the Gersix became a popular fixture in the Northwest.

In 1917 Worthington and his business partner Captain Frederick Kent bought the business, renaming it the Gersix Motor Co. In 1919 Kent retired from the business, and his son Harry Kent became Worthington's new partner. 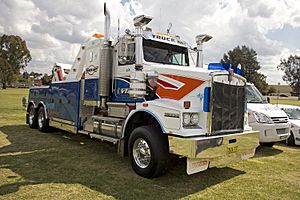 In 1922, Gersix made 53 trucks at its factory on Fairview Avenue at Valley Street. Trucks and motor coaches were assembled in individual bays rather than on a conventional assembly line. In 1923 Kent and Worthington reincorporated the business as the Kenworth Motor Truck Company, a combination of the names "Ken" and "Worth". In 1926 they started making buses, and in 1933 Kenworth was the first American company to offer diesel engines as standard in their trucks. In 1945 Kenworth was bought by The Pacific Car and Foundry Company. 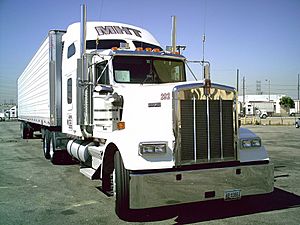 The 1970s television series "Movin On" featured a Kenworth tractor. In the 1989 James Bond movie Licence to Kill, Bond drives a Kenworth W900B semi-truck as he duels Franz Sanchez. The maximum load is 80,000 pounds.

The brand claims to maintain an image of high quality, it has won five of six JD Power Awards in 2005, and was a clear sweep in the 2007 J.D. Power Awards for Heavy Duty Truck Product Satisfaction.

All content from Kiddle encyclopedia articles (including the article images and facts) can be freely used under Attribution-ShareAlike license, unless stated otherwise. Cite this article:
Kenworth Facts for Kids. Kiddle Encyclopedia.