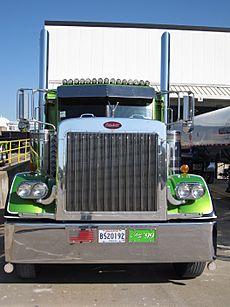 The Peterbilt Motors Company is an American company. It makes medium or heavy duty Class 5 through 8 trucks. The Peterbilt company started making trucks in 1939 and built 15 trucks that year. Their semi-trucks are made in different styles.

The company can trace its roots to the Fageol Motor Company. It was a regional truck maker that started in Oakland, California in 1916. The company made automobiles, trucks and tractors. The company made trucks that could stand up to the tough conditions of the deserts and mountains of the western United States. In 1923 they shut down all other products to concentrate on trucks. They made trucks from the 1920s and 1930s. Due to the Great Depression, the company went into bankruptcy in 1932. It kept operating under control of its creditors but by 1938 was about to shut down. In 1939 the company assets were purchased by T.A. Peterman, a logger and businessman from Tacoma, Washington. The name Peterbilt was already being used by one of his wood products companies and was used for his new truck manufacturing company.

All content from Kiddle encyclopedia articles (including the article images and facts) can be freely used under Attribution-ShareAlike license, unless stated otherwise. Cite this article:
Peterbilt Facts for Kids. Kiddle Encyclopedia.