Kenmore is a city in King County, Washington, United States, along the northernmost shore of Lake Washington. It is a suburban bedroom community that is located at the mouth of the Sammamish River, approximately 12 miles (19 km) northeast of downtown Seattle and 2 miles (3.2 km) west of Bothell. The city's population was 20,460 at the 2010 census. Kenmore is also home to the Kenmore Air Harbor, the largest seaplane-only passenger facility of its kind in the United States.

The city is connected to nearby areas by State Route 522 and the Burke-Gilman Trail, which both run east–west along the lakeshore. The city limits stretch north to the Snohomish County line and south to a border with Kirkland south of Saint Edward State Park and Bastyr University. Kenmore's official city flower is the dahlia, the official city bird is the great blue heron, and the official city evergreen is the rhododendron.

Founded in 1901, Kenmore's name comes third-hand from the Scottish village of Kenmore, via town founder home town of Kenmore, Ontario. McMasters and his wife Annie arrived in Puget Sound circa 1889 from Canada, intending to establish themselves in the shingle-making trade. They opened a shingle mill on the northern shore of Lake Washington on land leased from Watson C. Squire. By 1903, Kenmore had established a school system and post office, but it did not formally incorporate as a city until August 31, 1998.

Despite cargo railway service passing through the area as early as 1887 via the Seattle, Lake Shore and Eastern Railway, most access to the city in its early days was by boat, with regular ferry service to Seattle, Bothell, and Woodinville starting in 1906. The city later gained a passenger railroad stop. The first improved road connection to Seattle and Bothell—the Red Brick Road—opened between 1913 and 1914, with bus service following the laying of the bricks. As a result, Kenmore became a country retreat for weekend gardeners with local landowners selling off clear-cut "garden plots" to Seattlites with automobiles and green thumbs.

The archipelago of dining and entertainment - over 30 different restaurants, dance halls, bars, and clubs in a three-block area - remained a major part of Kenmore's identity through the 1940s.

Voucherville, the Cold War, and redevelopment

Once the Great Depression hit, Kenmore became home for a small settlement of workers under President Franklin D. Roosevelt's Back to the Land program. Paid by the Works Progress Administration, a small number of workers settled in an area of northwestern Kenmore which became known as "Voucherville", after the vouchers the WPA paid in lieu of a cash salary.

After the end of World War II, Kenmore became home to US Army Nike Hercules missile batteries as part of cold-war era defense plans. These nuclear-tipped anti-aircraft missiles were intended to protect Seattle and environs from Soviet bombers, should war break out. They were removed in 1974.

The post-war era largely transformed downtown. Kenmore Air Harbor, which today is one of the world's largest seaplane-only airports, opened not far from the old location of the Blind Pig; Kenmore Air itself today runs a fleet of seaplanes serving waterside destinations throughout Cascadia. At the same time, Kenmore's immediate proximity to Seattle—just two miles (3 km) north of modern Seattle city limits— made it an early target of post-war housing development. The first plaits in the new Uplake neighborhood were sold in 1954. Housing development continued throughout the Kenmore area for the next several decades, mostly following the postwar suburban model; industrial and commercial growth followed quickly behind, and within a few decades, most of the old Kenmore dining and drinking had vanished, replaced by shopping centers, industrial development, and housing. However, one part of this new development brought its own history along with it: the Jewel Box Building in downtown Kenmore is a Seattle World's Fair artifact, moved from Seattle Center to Kenmore after the end of the fair in October, 1962.

The city gained its first college in 1996, with the relocation of Bastyr University from Seattle onto the grounds of the former St. Edward Seminary.

Kenmore residents considered incorporation many times since the town's founding; one such incorporation vote failed in 1954. The idea gained popular support through the 1990s, however, partly in response to the passage of the Washington State Growth Management Act of 1990. Formation of an exploration committee in 1995 led to a successful public vote shortly thereafter, and the city formally incorporated on August 31, 1998, 97 years after its original founding.

Following incorporation, the new government set about devising a local set of zoning codes and a downtown development plan with the intent of reviving and rebuilding the traditional core areas of the city. A significant component of this plan involves extensive use of land now owned by the city, in the area known within the plan as the Northwest Quadrant. An open invitation was extended to all architects and developers to submit development plans for this newly available area in December, 2005. The City Council chose to negotiate primarily with Kenmore Partners LLC in April 2006. Design plans were submitted to the city the following summer, with a conceptual overview made available to the public at the same time. 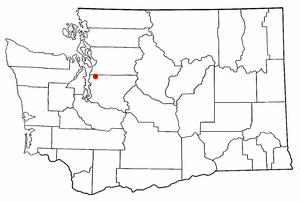 Kenmore is located at 47°45′10″N 122°14′50″W﻿ / ﻿47.75278°N 122.24722°W﻿ / 47.75278; -122.24722 (47.752870, -122.247360), with borders encompassing all of the north shore and a significant portion of the northeastern shore of Lake Washington. The local terrain is typical of the Puget Sound lowlands, consisting largely of rolling hills formed from glacial till, occasionally interrupted by flatlands typically found near substantial bodies of water. The largest river is the Sammamish, which connects Lake Sammamish to Lake Washington, and divides the city into northern and southern halves. Additionally, the northeastern corner of the city includes a narrow set of swamps and marshlands running north to south along Swamp Creek.

The climate of Kenmore is substantially similar to that of nearby Seattle, being defined principally by its latitude, proximity to the Pacific Ocean and Puget Sound, and inclusion in the Puget Sound Convergence Zone. As such, it is usually considered Marine west coast in nature, with damp, cool winters, and mild, dry summers, despite being further north than cities such as Toronto and Montreal.

Kenmore has several distinct neighborhoods. These include:

Arrowhead, Kenmore, from across Lake Washington in Log Boom Park

Northern Kenmore and the Cascade Mountains as seen from Uplake Terrace, looking east

Since 2000, a significant number of developers have been converting former pastureland to high-end housing in the northern section of the city. As a result, the overall character of these sections of town has been rapidly changing, from run-down and semi-rural to affluent suburbia. This has also affected nearby Bothell, resulting in the creation of numerous commercial developments.

There were 7,984 households, of which 33.5% had children under the age of 18 living with them, 55.3% were married couples living together, 9.1% had a female householder with no husband present, 4.3% had a male householder with no wife present, and 31.3% were non-families. 23.4% of all households were made up of individuals, and 7.9% had someone living alone who was 65 years of age or older. The average household size was 2.55 and the average family size was 3.01.

Kenmore is served by Seattle-area media, but town and neighborhood events are covered primarily by the Bothell/Kenmore Reporter, a weekly and online newspaper published by Sound Publishing. Once a month, a Kenmore city government update is printed within the newspaper as a two- to four-page supplement. The Kenmore Reporter is delivered free of charge throughout the city. For its part, the city also sends out a quarterly eight-page newsletter to all residents discussing government activities, development project status reports, budgetary summaries, and a community events calendar.

Family Circle Magazine selected Kenmore,Washington as one of the "10 Best Towns for families" in their August 2009 edition. Seattle Magazine also ranked Kenmore as the best Seattle-area neighborhood or surrounding city for 2008-2009. 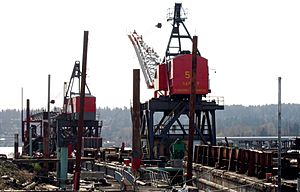 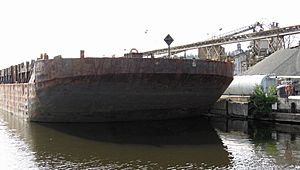 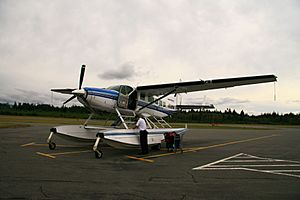 A Kenmore Air Cessna 208 on the ground in Campbell River

Kenmore also hosts one of the last industrial ports on Lake Washington, at the mouth of the Sammamish River. Larger local businesses near the port include Rinker Materials's Kenmore plant, Kenmore Ready-Mix (cements and asphalts, a division of Glacier Northwest), Pacific Topsoils (topsoils and landscape construction materials), Michael Homchick Stoneworks (stone fabrication and installation), Plywood Supply (lumber, plywood, and millwork, wholesale, retail, and company headquarters), and several others. As home to the James G. Murphy Company, one of the ten largest commercial/industrial auction houses in the United States, the city is also an auction center.

Kenmore is home to Bastyr University, a leading private school of naturopathic medicine founded in 1978 and accredited by the Northwest Commission on Colleges and Universities (NWCCU). The city is also situated between the University of Washington's main Seattle campus and UW Bothell and Cascadia College, both in nearby Bothell, Washington. Paved bike trails and express bus service connect the city to all three schools. The city also has a bus connection directly to Shoreline Community College.

All content from Kiddle encyclopedia articles (including the article images and facts) can be freely used under Attribution-ShareAlike license, unless stated otherwise. Cite this article:
Kenmore, Washington Facts for Kids. Kiddle Encyclopedia.