Ravensdale is a census-designated place (CDP) in King County, Washington, United States. The population was 1,101 at the 2010 census. It is in the Pacific Standard Time Zone. The elevation is 623 feet (190 m).

Based on per capita income, one of the more reliable measures of affluence, Ravensdale ranks 50th of 522 areas in the state of Washington to be ranked. 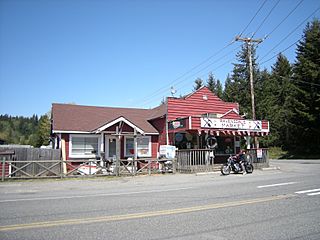 Ravensdale was originally called Leary, after the name of Leary Coal Company, in turn named for John Leary, a Seattle coal speculator. The later name came from the flocks of ravens that fed on grain spilled from the boxcars on the Northern Pacific Railroad tracks that ran through the town. Underground coal mining commenced around 1899 by the Seattle and San Francisco Railway and Navigation Company, although coal had been mined in nearby Danville and Landsburg a few years earlier. The coal mines were later acquired by Northwest Improvement Company (NWI), a subsidiary of Northern Pacific. In 1907, Ravensdale, Washington was a coal mining town with a population of about 1,000 residents, most of whom worked for the mining company. Ravensdale was officially incorporated on August 15, 1913. On November 16, 1915 at 1:25 p.m. an explosion occurred at the mine killing thirty-one men, one of the worst coal mining accidents in Washington state history. The NWI mine was closed permanently and many of the immigrant miners left town seeking work elsewhere. A number of coal miners from Ravensdale moved to Ray, Arizona to mine copper.

This region experiences warm (but not hot) and dry summers, with no average monthly temperatures above 71.6 °F. According to the Köppen Climate Classification system, Ravensdale has a warm-summer Mediterranean climate, abbreviated "Csb" on climate maps.

There were 301 households out of which 36.9% had children under the age of 18 living with them, 62.8% were married couples living together, 6.0% had a female householder with no husband present, and 27.9% were non-families. 22.3% of all households were made up of individuals and 5.6% had someone living alone who was 65 years of age or older. The average household size was 2.71 and the average family size was 3.19.

10% of Ravensdale residents aged 25 and older have a bachelor's degree.

The average commute time for Ravensdale workers is 31 minutes, compared with 26 minutes nationwide.

All content from Kiddle encyclopedia articles (including the article images and facts) can be freely used under Attribution-ShareAlike license, unless stated otherwise. Cite this article:
Ravensdale, Washington Facts for Kids. Kiddle Encyclopedia.