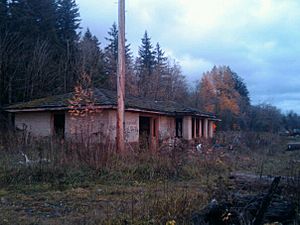 The Northern Pacific's third depot at Kanaskat, built at the close of World War Two on the alignment used before the construction of Howard Hanson Dam (Abandoned)

In 1900 the NP built a 2,850-foot passing track, a 1,200-foot house track, a wye connection with the Green River Branch to Kangley, Selleck, Barneston and Kerriston, a fourth class combination station, a second class section house, a 24-man bunkhouse, a double tool house, and a box water tank and standpipe. The ornate Victorian station at this site was burned to the ground in 1944 when a wood stove pipe through the roof overheated and caught fire. It was replaced by an innovative temporary station -– a round-roof box car. After World War Two the Northern Pacific replaced the box car with a solid brick station. This lasted until 1959, when the U.S. Army Corps of Engineers were forced to build the Northern Pacific yet another station directly northwest of its postwar structure (due to the line change caused by the Corps of Engineer's Howard A. Hanson Dam at Eagle Gorge). Thus, Kanaskat had the dubious honor of being home to four stations in 90 years.

The Chicago, Milwaukee, St. Paul and Pacific Railroad also crossed through the area, moving north-south from its main line station at Cedar Falls, Washington, south to the large mill at Enumclaw, Washington. Track connections between the two roads were made to the north and south of town.

It was named after Kanasket (alternately spelled Kanaskat), a chief of the Klickitat people, who was killed by the U.S. Army ca. 1855-56.

Kanaskat-Palmer State Park is just south of the settlement.

All content from Kiddle encyclopedia articles (including the article images and facts) can be freely used under Attribution-ShareAlike license, unless stated otherwise. Cite this article:
Kanaskat, Washington Facts for Kids. Kiddle Encyclopedia.