White Center is a census-designated place (CDP) in King County, Washington, United States. It lies between West Seattle and Burien. The population was 16,631 at the 2020 census.

White Center is sometimes referred to by the nickname "Rat City" due to the historical presence of a military Relocation and Training Center during World War II. The Rat City Rollergirls are a Seattle roller derby team that began training in White Center.

White Center is one of only two heavily-urbanized areas in King County that is not incorporated as part of a city (the other being Skyway). Seattle has been working towards incorporating the area since the mid-2000s. An area south of White Center, known as North Highline, was annexed by neighboring Burien on 1 April 2010. The Seattle city council rejected annexation of White Center in 2009, and a measure to annex White Center to Burien was rejected by voters in 2012.

Plans to annex White Center got a boost in March 2016 when the state legislature directed that $7 million go to the City of Seattle if it annexes the area. Annexation currently has support in the area, due to the low quality of services provided by King County, which has largely focused on governing rural areas instead. Completing annexation would require approval by the voters in the area as well as Seattle City Council, and would not be completed before 2017. 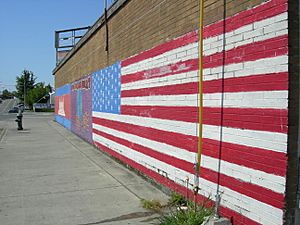 U.S. and Cambodian flags on the side of the New Angkor Market

All content from Kiddle encyclopedia articles (including the article images and facts) can be freely used under Attribution-ShareAlike license, unless stated otherwise. Cite this article:
White Center, Washington Facts for Kids. Kiddle Encyclopedia.