Marrowstone is a census-designated place (CDP) in Jefferson County, Washington, United States. The population was 844 at the 2010 census. All Marrowstone addresses are in Nordland, Washington, and the ZIP code for Marrowstone Island is 98358.

Marrowstone takes its name from Marrowstone Point, the northernmost point on Marrowstone Island. It was given the name "Marrow-Stone Point" in 1792 by the British explorer, George Vancouver, in describing the area's hard, clay-like soil. 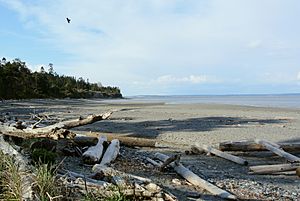 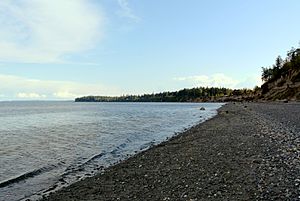 Northern side of Nodule Point 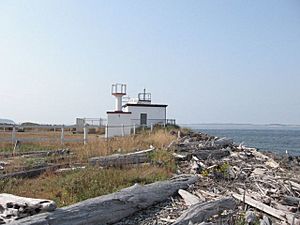 According to the United States Census Bureau, the CDP has a total area of 6.3 square miles (16.4 km²), all of it land.

Fort Flagler, a Washington state park, is situated on 784 acres (314 hectares) at the northern end of Marrowstone Island. It overlooks Port Townsend Bay and Admiralty Inlet, the entrance to Puget Sound. Fort Flagler was one of three forts, along with Fort Worden (near Port Townsend) and Fort Casey (on Whidbey Island), that guarded the entrance to Puget Sound. Mystery Bay State Park is another state park on Marrowstone Island, located on 10 acres (4 hectares) of Mystery Bay shorefront about a half-mile north of the Nordland General Store. It is primarily for boaters. Kinney Point State Park comprises 76 acres (310,000 m2) at the south end of the island. Accessible only by boat, it is part of the Cascadia Marine Trail.

There were 432 households out of which 10.4% had children under the age of 18 living with them, 55.1% were married couples living together, 3.7% had a female householder with no husband present, and 39.8% were non-families. 30.3% of all households were made up of individuals and 16.0% had someone living alone who was 65 years of age or older. The average household size was 1.95 and the average family size was 2.37.

At noon on every January 1 since 1994, residents and visitors have gathered on the dock in front of the Nordland General Store for the Polar Bear Dip, organized by store owner Tom Rose. The Nordland General Store sells commemorative shirts and hats each year. Water temperatures are in the forties (Fahrenheit) and air temperatures are about the same.[1] On more than one occasion, there has been standing ice on the water in the days prior to the Polar Bear Dip.

For approximately 100 years, Marrowstone has held its annual Strawberry Festival in June. Residents and visitors enjoy strawberry shortcake at the Nordland Garden Club Building. Strawberries were once grown all over Marrowstone and can be found growing wild on the island.

Every Memorial Day weekend, island residents bring their tractors to parade them in front of the Nordland General Store.

The Marrowstone Island Community Association hosts the Strawberry Festival each year. It meets about 7 times throughout the year at the Nordland Garden Club Building.

The Seattle Youth Symphony's Marrowstone Music Festival - now called Marrowstone Summer Music and held on the campus of Western Washington University, in Bellingham, Washington – was held at Fort Flagler on the northern end of Marrowstone Island from 1958 until 1989. Until 1975, it was called the Pacific Northwest Music Camp.

All content from Kiddle encyclopedia articles (including the article images and facts) can be freely used under Attribution-ShareAlike license, unless stated otherwise. Cite this article:
Marrowstone, Washington Facts for Kids. Kiddle Encyclopedia.