It is bordered on the south by Sinclair Inlet, on the west by the Bremerton Annex of Naval Base Kitsap, and on the north and east by the city of Bremerton, Washington. It is the Pacific Northwest's largest naval shore facility and one of Washington state's largest industrial installations. PSNS & IMF provides the Navy with maintenance, modernization, and technical and logistics support, and employs 14,000 people. 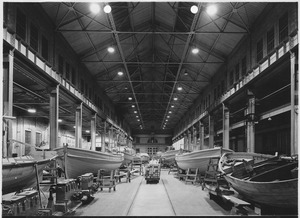 Puget Sound Naval Shipyard was established in 1891 as a Naval Station and was designated Navy Yard Puget Sound in 1901. During World War I, the Navy Yard constructed ships, including 25 subchasers, seven submarines, two minesweepers, seven seagoing tugs, and two ammunition ships, as well as 1,700 small boats. During World War II, the shipyard's primary effort was the repair of battle damage to ships of the U.S. fleet and those of its allies.

Following World War II, Navy Yard Puget Sound was designated Puget Sound Naval Shipyard. It engaged in an extensive program of modernizing carriers, including converting conventional flight decks to angle decks. During the Korean War, the shipyard was engaged in the activation of ships. In the late 1950s, it entered an era of new construction with the building of a new class of guided missile frigates. In 1965, USS Sculpin (SSN 590) became the first nuclear-powered submarine to be maintained at PSNS. The shipyard was designated a National Historic Landmark in 1992. The historic district includes 22 contributing buildings and 42 contributing structures, as well as 49 non-contributing buildings, structures, and objects.

Perhaps the most visible feature of the shipyard is its huge green hammerhead crane, built in 1933. The PSNS hammerhead crane is 250 feet (76 m) tall and 80 feet (24 m) wide with a lifting capacity of 250 tons.

These five units are a comprehensive representation of the historic features of the naval shipyard.

PSNS is the only U.S. facility certified to recycle nuclear ships. During all this period Puget Sound Naval Shipyard has scrapped more than 125 submarines and some cruisers.

The shipyard contains a portion of the United States Navy reserve fleet, a large collection of inactive U.S. Navy vessels, including the aircraft carrier USS Kitty Hawk (CV-63). Kitty Hawk is mothballed, meaning that she is stored in case she is needed by the Navy in the future.

Gorst Creek Ravine near Port Orchard, Washington was a hazardous waste dump for the Navy's shipyard waste between 1969 and 1970, when the site was not permitted by local authorities to take waste. After several collapses since 1997 the landfill could blow out Highway 3. The landfill is an "ongoing source of pesticides, polychlorinated biphenyls and metals flowing downstream with the potential to affect groundwater wells, sport fisheries and the Suquamish Tribe's fish hatchery. In October 2014, the US EPA ordered the Navy to fix the problems.

All content from Kiddle encyclopedia articles (including the article images and facts) can be freely used under Attribution-ShareAlike license, unless stated otherwise. Cite this article:
Puget Sound Naval Shipyard Facts for Kids. Kiddle Encyclopedia.