Minden is a small city in and the parish seat of Webster Parish in northwestern Louisiana, United States. It is located twenty-eight miles (45 km) east of Shreveport in Caddo Parish. The population has been relatively stable since 1960, when it was 12,786. Minden is 51.7 percent African American.

Minden is the principal city of the Minden Micropolitan Statistical Area, which is part of the larger Shreveport-Bossier City-Minden Combined Statistical Area. It is a regional trade center for the neighboring parishes of Bienville and Claiborne, from which Webster Parish was carved in 1871.

Minden has possessed a United States post office since 1839. The current postal building, a 10,000-square-foot structure at 111 South Monroe Street, was completed under a $285,000 contract awarded in 1959 to McInnis Construction Company of Minden.

The community has been served by a newspaper since the 1850s. The current publication, the Minden Press-Herald, is located on Gleason Street south of Broadway. The building was formerly used by a grocery store. The Press-Herald became a daily newspaper on July 18, 1966, but was earlier published as two weekly papers, the Minden Press on Mondays and the Minden Herald on Thursdays. For a time there was also the Webster Signal-Tribune and other publications.

On October 15, 2012, an ordnance bunker at nearby Camp Minden exploded resulting in minor property damage. Camp Minden is the site of the former Louisiana Army Ammunition Plant, once the major area employer. In December 2012, police began the removal of 2,700 tons of explosives from Camp Minden, leading to evacuations in the nearby town of Doyline.

In 1959, Minden was named the "Cleanest City in Louisiana." 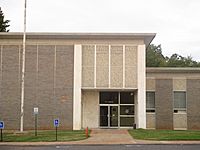 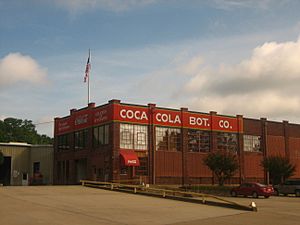 Among the original settlers in the Minden area was Newitt Drew, a Welshman originally from Virginia, who built a gristmill and sawmill on Dorcheat Bayou in south Webster Parish in what became the since defunct Overton community. Minden itself was established in 1836 by Charles H. Veeder, a native of Schenectady, New York, who named it for the city of Minden in Germany. Veeder left Minden during the California Gold Rush and spent the rest of his life practicing law in Bakersfield, California.

A year before Veeder arrived, a group from Phillipsburg (now Monaca), Pennsylvania, led by the Countess Leon, settled seven miles (11 km) northeast of Minden in what was then Claiborne Parish. For nearly four decades, this Germantown Colony operated on a communal basis. It was dispersed in 1871, when Webster Parish was severed from Claiborne Parish. The "Countess" moved to Hot Springs, Arkansas, where she died in 1881.

One of three Utopian Society settlements in this area, the Germantown Colony was the most successful and lasted the longest, having peaked at fifty to sixty pioneers but usually with fewer than forty followers. The settlement had been planned by the countess’ husband, Bernhard Müller, known as the Count von Leon. He died of yellow fever on August 29, 1834, at Grand Ecore, four miles (6 km) from Natchitoches, before he reached Webster Parish. Leon and his followers attempted to build an earthly utopia, socialist in practice, while awaiting for the Second Coming of Christ. For his religious views, Leon had been exiled from Germany. He intended to plant the settlement in Webster Parish to coincide with the latitude of Jerusalem, 31 degrees, 47 minutes. The colonists worshiped under oak trees at the center of the colony. They supported themselves from farming, with a concentration on cotton. The settlement is preserved at the Germantown Colony and Museum.

A second museum in Minden, the Dorcheat Historical Association Museum, named for Dorcheat Bayou, is located downtown at 116 Pearl Street near the post office. It preserves the cultural history of the city and parish from the 19th century. 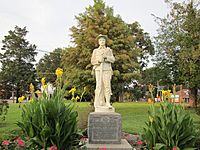 Statue of a Confederate soldier at the western end of Jacqueline Park in Minden near the point where Main and Broadway streets turn into the Shreveport Road. The caption concludes with "Lest We Forget" engraved twice.

During the American Civil War, a large Confederate encampment, which housed some 15,000 soldiers was located east of Minden. At the time Minden was a supply depot for the troops. Some thirty Confederate soldiers who died in the Battle of Mansfield and another engagement at Pleasant Hill are buried in the historic Minden Cemetery located at Pine and Goodwill streets and Bayou Avenue. A modern cemetery, Gardens of Memory, opened in 1957 off the Lewisville Road north of Minden.

In 1862, Confederate General Richard Taylor, son of Zachary Taylor, issued orders to round up deserters. According to the historian John D. Winters of Louisiana Tech University, near Minden were seen "many robust-looking men claiming to be 'discharged soldiers.'" General Taylor reported that a "'large number of persons liable to military service . . . , deserters, enrolled conscripts who have failed to report, between the ages of eighteen and thirty-five, are to be found throughout the state.' He ordered militia officers and parish sheriffs to arrest all men who could not prove legal exemption or absence from military service because of furlough or parole. Liberal rewards were offered for the apprehension of such men."

Governor Henry Watkins Allen tried to make the state self-sufficient during the war. A factory for the manufacture of cotton and wool cards was erected at Minden and in full operation by the end of the war. In 1864–1865, divisions of General Camille Armand Jules Marie, Prince de Polignac, hero at Mansfield, and Maj. Gen. John H. Forney established winter quarters near Minden.

On February 13, 1890, Minden recorded the state's all-time coldest temperature, −16 °F (−27 °C) degrees during the height of the Great Blizzard. Another −16 °F (−27 °C) reading was recorded in Minden on February 2, 1899. The humid subtropical climate, however, is usually mild in winter and mostly hot in summer. 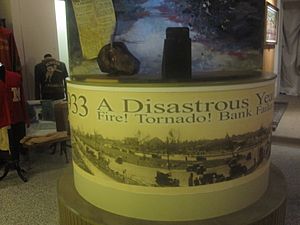 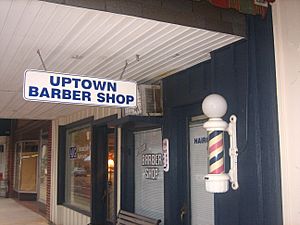 During the Great Depression, one of the two Minden banks failed. Five banks now exist, Minden Building and Loan, Capital One, Regions, Citizens, and Richland State. On May 1, 1933, a tornado destroyed some 20 percent of the residences in Minden. Thereafter, a fire destroyed many homes and much of the business district, including the large Goodwill Building, established in 1882 by Alfred Goodwill, which once housed the largest general store in Louisiana. During the national bank holiday of 1933, the funds of both Minden citizens and businesses were frozen, making recovery from the tornado and the fire more difficult. Later, a summer flood destroyed a third of the crops in the area. Because of these quadruple tragedies, 1933 has been called the "Year of Disaster" in Minden.

Ben F. Turner, Sr. (1883–1934), was the Louisiana and Arkansas Railway express agent in Minden and the volunteer fire chief. During the 1933 fire, he sustained a heart attack and hence died the next year of cardiac failure. Oddly, Ben Turner's grandfather had died in 1835 while fighting a fire at a brush arbor meeting in Georgia. Ben Turner's son, Harold Martin "Happy" Turner (1911–1988), was a well-known boarding house, restaurant owner, and civic booster in Minden.

The 1946 beatings and attempted lynchings of John Cecil Jones and Albert Harris, Jr., African-American men, were instances of violence against black veterans in the post-war years. The events were covered up by Minden police, the Webster Parish Sheriff's Department, the coroner's office, and several well-known individuals in the community. The crime was the only lynching in Louisiana that year. J. Edgar Hoover, Director of the FBI, investigated the case and wrote: "We had incontrovertible evidence of a multiple-agency cover-up."

Country singer Hank Williams, Sr., married Billie Jean Jones Eshliman in Minden on October 18, 1952. The next day, the couple repeated the vows in two separate public ceremonies. Less than three months later, Williams was dead. A judge ruled that the wedding was not legal because Billie Jean's divorce did not become final until eleven days after she had married Williams. Billie Jean later married Johnny Horton, another notable singer. Horton died in 1960 and is interred at Hill Crest Cemetery in Haughton in Bossier Parish.

Minden has long led the nation in per capita fundraising for St. Jude Children's Research Hospital in Memphis, Tennessee. From 1975 to 2015, city residents raised $13,923,763. Early in 2016, another $1,441,599 was raised through auction, a benefit run, and school fundraisers. In the first year of the auction, $10,000 was raised, but the amounts grew rapidly over the ensuing years. Annual records have frequently been toppled.

All content from Kiddle encyclopedia articles (including the article images and facts) can be freely used under Attribution-ShareAlike license, unless stated otherwise. Cite this article:
Minden, Louisiana Facts for Kids. Kiddle Encyclopedia.