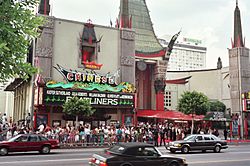 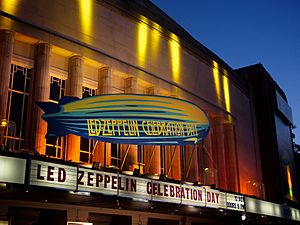 Film premieres can be elaborate media events, such as this 2012 exhibition of Celebration Day with promotional artwork on the Hammersmith Apollo

A movie release (or premiere) is when a completed movie is released for the public to see. It may be in theaters or for home viewing. A movie's release date can affect how much money the movie makes.

A movie's release date and how it is released is a part of the marketing of the movie. Often a movie will be tested on selected audiences to see how they like it. This is called a limited release. A movie might also be shown first at a film festival to see how it does. If an audience does not like something, the moviemakers can make changes before it is released to the public.

There were traditional times of the year for releases of certain types of movies. Summer was the traditional time to release blockbuster movies. These are large budget movies with a great deal of publicity. Spring was the usual time for art films. Another major time of the year to release major movies is Christmas. Lately, however, the movie calendar has become very crowded with more new releases. This means that blockbuster movies now come out all during the year.

A print is a copy of the physical film itself. Each movie theater needs a print for showing. This becomes expensive and along with advertising they are called 'P&A'. Advertising can include parties for the stars of the movie. It can also mean arranging interviews on talk shows and placing movie clips on video sharing websites like YouTube. This is to get people talking about the movie. The period of time for advertising a movie only a few weeks before it is released. After that time it is hoped will advertise the movie.

The movie Four Weddings and a Funeral was released in the United States in 1994. The distributor, Polygram, had a limited P&A budget. They released the movie on a limited basis, in New York and Los Angeles. They spent heavily on advertising in these cities hoping the limited release would be a success. In this case it was and they used the profits to gradually release the movie all over the country. This is called a 'platform release'. It allows smaller movie studios to compete with the large P&A budgets of the big studios.

All content from Kiddle encyclopedia articles (including the article images and facts) can be freely used under Attribution-ShareAlike license, unless stated otherwise. Cite this article:
Movie release Facts for Kids. Kiddle Encyclopedia.