Mount Ascutney is a mountain in the U.S. state of Vermont. At 3,144 feet (958 m), it is the second-highest peak in Windsor County. (The highest peak in the county is Gillespie Peak in the Joseph Battell Wilderness.) Mount Ascutney is a monadnock that rises abruptly from the surrounding lowlands. For example, the Windsor Trail is 2.7 miles (4.3 km) to the summit with 2,514 feet (766 m) of elevation gain and an overall 18% grade. Particularly noteworthy are the mountain's granite outcrops, one of which, near the summit, serves as a launching point for hang-gliders.

The mountain's base straddles several villages — Ascutney, Brownsville, Windsor, and West Windsor — and it is located only several miles off exit 8 on Interstate 91 in Mount Ascutney State Park. The mountain itself is visible from the top of Mount Washington, seventy miles away.

Mt. Ascutney is located in the southeastern section of Windsor County, in the Connecticut River Valley. The village of Ascutney, in the town of Weathersfield, is to the south. To the north lie the towns of Windsor and West Windsor. The village of Brownsville, in the town of West Windsor, sits at the northwestern base of the mountain. To the east lies the Connecticut River and the city of Claremont, New Hampshire. To the immediate west stands another, smaller mountain, fittingly named Little Ascutney Mountain.

Since the Colonial era, the mountain has primarily been referred to as "Mount Ascutney" (or such variant spellings as "Aschutney"), a name made official by the U.S. Board on Geologic Names in 1960. While various folk etymologies exist, many modern sources trace the name "Ascutney" to the Abenaki word Ascutegnik, a word meaning "at the end of the river fork," which was the name of a settlement near where the Sugar River meets the Connecticut River. However, the use of the Abenaki word Kaskadenak (pronounced: Cas-Cad-Nac)–which means "mountain of the rocky summit" or "wide mountain"–as a name of the mountain has long been attested, and the Board on Geologic Names acknowledges the name as an official variant. In 2016, Hartland resident Robert Hutchins petitioned the Board to change the official name to Kaskadenak, garnering the support of Chief Paul Bunnell of the Koasek Traditional Band of the Abenaki Nation among others. In July 2018, the State of Vermont Board of Libraries, which has the statuatory authority to name geographical features, heard arguments to officially rename the mountain to Mount Kaskadenak. The Board of Libraries voted 5–0 to reject the name change, citing the testimony of town managers who reported local opposition at meetings on the name change and the results of polling. The Board also cited an email from Smithsonian linguist Ives Goddard, who proposed that the origin of the name "Ascutney" was the Abenaki word kskatena and wrote that

“Ascutney […] and Cascadnac (from Western Abenaki kaskadenak) are both authentic names meaning 'wide mountain.' Both names reflect variable features of the local Native American language and of English from different times.”

At longer distance, the mountain is visible from many locations quite a few miles away, particularly hilltops and other mountains. Ascutney can be viewed from select locations on the Dartmouth College campus, among them the upper floors of Rauner Library and the Steele Chemistry Building.

From the late 1880s to 1930, a community of artists thrived in Cornish and Plainfield, New Hampshire as well as Windsor, Vermont. Besides Augustus Saint-Gaudens, other artists built their homes specifically sited towards the mountain, and it became the focal point of many expansive gardens and Italianate villas. Maxfield Parrish, Charles Platt, Thomas Dewing, and Winston Churchill (the writer) all built homes to view the mountain. Many of these houses remain, view intact, and the estate Augustus Saint Gaudens is now a national park, with, of course, a lovely view.

Mount Ascutney is part of the White Mountain plutonic-volcanic series of igneous rocks. These rocks intruded from Triassic to Cretaceous time in southern Maine, New Hampshire, and Vermont with the relatively young Ascutney pluton intruding at ~122 MA (K/Ar date on Biotite). The Ascutney pluton is about 8 km × 4 km in map area and intrudes Precambrian basement gneisses of the Chester dome and overlying Paleozoic metasedimentary rocks. The pluton emplacement is probably related to the formation of transform faults and/or fracture zones during (failed) Mesozoic rifting. The petrology of the pluton consists of three stocks which are gabbro-diorite, syenite and granite. There is also a partial ring dike and number of other dikes in the area.

The last glacier broke material off the mountain and distributed it southward into Massachusetts. The trail it left is known as the "Mount Ascutney Train."

Mount Ascutney is a hang gliding site in New England. Notable for its excellent soaring, it is not unusual for hang gliders to fly from Mt. Ascutney to nearby states. Some trips can stretch to the New Hampshire or Massachusetts coastline, a flight of over 90 miles.

Actor Charles Bronson owned a farm near the mountain he and his wife named Zuleika, after their daughter. His remains were buried at Brownsville Cemetery in West Windsor, near the foot of the mountain, after his 2003 death.

Wild turkeys, deer, porcupines, and a wide variety of birds are commonly seen on Mt. Ascutney. The mountain is a favorite area for viewing migrating birds, which use the Connecticut River as a navigation pathway. More rarely seen wildlife includes moose, black bears, bobcats and fishers.

The mountain features four principal hiking trails, three of which are named for the town from which that trail originates:

At the top, a relatively level trail follows the ridgeline and crosses the summit. The top of the mountain is well below the tree line and is therefore covered in forest. There are a number of rocky cliffs allow good viewing, one lookout in particular The Nowlan Lookout is named for a local American sculptor Lawrence Nowlan. There is an observation tower, as well. There are also two large communications towers.

The summit can also be reached via a short trail from the parking lot at the end of the only road up the mountain, the Mt. Ascutney State Park Mountain Road.

Skiing and the Ascutney Mountain Resort 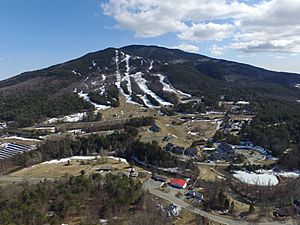 Mt. Ascutney was home to the Ascutney Mountain Resort, which was a ski resort located on the mountain's northwest face, in the village of Brownsville. Opening after the end of World War II, skiing facilities originally consisted of just one rope tow. The resort property was purchased by IHG Resorts in 2008 andcontinues to renovate and improve the property. The mountain and trails were purchased by a non-profit organization Vermont Outdoors and is now operated as town forest for Brownsville Vermont. The trails accommodate the entire family, but expert and intermediate skiers found themselves most at home at the resort, whose trails averaged from medium grade to steep, and were often icy from the mountain's often harsh winds. The ski resort's primary competitors were Killington, Okemo, Mount Sunapee, and Stratton.

All content from Kiddle encyclopedia articles (including the article images and facts) can be freely used under Attribution-ShareAlike license, unless stated otherwise. Cite this article:
Mount Ascutney Facts for Kids. Kiddle Encyclopedia.