Windsor is a town in Windsor County, Vermont, United States. As the "Birthplace of Vermont", the town is where the Constitution of Vermont was adopted in 1777, thus marking the founding of the Vermont Republic, a sovereign state until 1791, when Vermont joined the United States. Over much of its history, Windsor was home to a variety of manufacturing enterprises. Its population was 3,559 at the 2020 census. 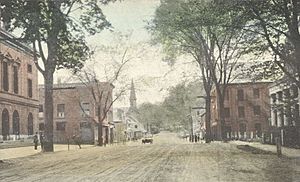 One of the New Hampshire grants, Windsor was chartered as a town on July 6, 1761, by colonial governor Benning Wentworth. It was first settled in August 1764 by Captain Steele Smith and his family from Farmington, Connecticut. In 1777, the signers of the Constitution of the Vermont Republic met at Old Constitution House, a tavern at the time, to declare independence from the British Empire (the Vermont Republic would not become a state until 1791). In 1820, it was the state's largest town, a thriving center for trade and agriculture. In 1835, the first dam was built across Mill Brook to provide water power. Factories made guns, machinery, tinware, furniture and harnesses. The community is named for Windsor, Connecticut.

In 1846, Robbins and Lawerence received a government contract to manufacture firearms. Using advanced machine tools to produce interchangeable parts, they and their associates established factories in the Connecticut River valley and throughout New England. Two factories, now both closed, sustained the economy of Windsor: Cone Automatic Machine Company and a Goodyear Tire and Rubber Company plant.

Windsor village began development at the end of the 18th century and achieved importance in Vermont history as the location of the framing of the constitution of Vermont. It is known as the birthplace of Vermont, where the state constitution was signed, and acted as the first capital until 1805 when Montpelier became the official state capital.

Commerce prospered due to the village's location on the banks of the Connecticut River where several smaller streams run into it. The economy improved in the mid-19th century when Windsor became the first town in the state to break ground for the railroad with the construction of a rail depot. Windsor Station connected the town to out-of-state markets. It was after the railroad went through that the area was discovered by tourists.

The town is crossed by Interstate 91, U.S. Route 5, Vermont Route 12, Vermont Route 44, and Vermont Route 44A. It is bordered by the town of Weathersfield to the south, West Windsor to the west, and Hartland to the north. To the east, across the Connecticut River, is Cornish, New Hampshire, to which Windsor is connected by the Cornish–Windsor Covered Bridge, one of the longest covered bridges in the world.

There were 1,520 households, out of which 28.5% had children under the age of 18 living with them, 45.3% were couples living together and joined in either marriage or civil union, 12.2% had a female householder with no husband present, and 37.8% were non-families. 31.8% of all households were made up of individuals, and 15.5% had someone living alone who was 65 years of age or older. The average household size was 2.29 and the average family size was 2.83.

Windsor is served by Mount Ascutney School District, Vermont. The district is home to the Windsor Yellow Jackets and serves grades kindergarten to twelfth. The three schools in the district are the Windsor School and Windsor High School, as well as Albert Bridge School in West Windsor, Vermont.

All content from Kiddle encyclopedia articles (including the article images and facts) can be freely used under Attribution-ShareAlike license, unless stated otherwise. Cite this article:
Windsor, Vermont Facts for Kids. Kiddle Encyclopedia.