The American Precision Museum is located in the renovated 1846 Robbins & Lawrence factory on South Main Street in Windsor, Vermont. The building is said to be the first U.S. factory at which precision interchangeable parts were made, giving birth to the precision machine tool industry. In recognition of this history, the building was declared a National Historic Landmark in 1966. In 1987, the building was recognized by the American Society of Mechanical Engineers as an International Heritage Site, and the collection was recognized as an International Heritage Collection. For each of these designations, the armory was considered a site where pivotal events occurred in the history of American industry, as well as a place that lends itself to comprehensive interpretation of that history.

A "machine tool" is a machine which makes parts to other machines, such as screws or gun stocks, generally without a skilled craftsman doing the precision work. Instead, a machine operator controls the machine as it does the precision work. Lathes, milling machines, and drill presses are precision machine tools. The museum has the largest collection of historically significant machine tools in the United States. The museum's holdings include a collection of industrial machinery spanning the first one hundred years of precision manufacturing, along with fine examples of early machined products including rifles, sewing machines, and typewriters. Photographs and archival records provide additional resources for interpreting this critical phase of the Industrial Revolution.

The museum is open daily from 10am until 5pm from May 1 through October.

Richard S. Lawrence, a brilliant mechanic, moved to Windsor in 1838 at age 21 and started making guns in the Windsor Prison. He joined Nicanor Kendall, who had a gun-making shop, and together started a new company. Four years later businessman Samuel E. Robbins came to Windsor. In 1846, Samuel Robbins, Nicanor Kendall, and Richard Lawrence took the bold step of bidding on a government contract for 10,000 rifles. Having won the contract, they then constructed a four-story brick building beside Mill Brook. Over the next eight years, the factory was built and machines to make precision parts were made. They brought in workers and mechanics, invented new machines, adapted old ones, and perfected techniques for producing interchangeable parts. Later, Lawrence bought out Kendall. Within a few years, they were exporting not only rifles but also their new metal cutting machines across North America, to England and around the world. The technology for making guns was quickly adapted to making consumer products as well as parts for many other machines

The imposing, four-story structure rises from a stone foundation adjacent to a brook that provided immediate and efficient use of waterpower. Inside, power was distributed throughout each floor with line shafting; the shafts were connected to individual machines by leather belts. Abundant windows and the building's narrow width relative to its length (40’ x 100’), brought daylight into the interior work areas. Outside, the immediate neighborhood is still home to worker housing that was built at various times in the factory's history. The nearby Connecticut River and the active railroad attest to the importance of transportation in the development of the site.

The building operated as a cotton mill beginning in 1866 for nearly two decades, before returning to manufacturing machine tools in 1888. Ten years later the property was sold to the Windsor Electric Light Company, before being sold to the Central Vermont Public Service Company in 1926.

In 1964, CVPS proposed razing the building, prompting Smithsonian curator and Windsor resident, Edwin A. Battison to formulate plans for the creation of a museum. Battison had a relationship with CVPS, storing various items in the building since the 1950s.

Windsor native Battison founded the American Precision Museum in 1966 and served as its director until 1991. Battison, a  curator of Mechanical Engineering at the National Museum of American History at the Smithsonian Institution, secured the Robbins & Lawrence Armory to house the museum and the collection of historic machine tools, related books, and archival materials he had collected during his lifetime.

The armory building is significant for its architectural integrity, which reflects the size, scale, and operation of a 19th-century factory. A National Historic Landmark, in 2001 it was designated a special project of Save America’s Treasures; in 2003, APM received a Save America’s Treasures award of $200,000 for installing a new slate roof to replace the deteriorated original.

Legacy of Robbins and Lawrence

Early Manufacturing and the “American System”

The first phase of the Industrial Revolution was introduced in America during the late 18th century and was modeled on the English system of textile manufacturing. In 1846, when the Armory was built, the second phase of the Industrial Revolution—the “American System”—was about to be launched. In the remote village of Windsor, entrepreneurs and artisans had already constructed a series of dams that powered sawmills and a gristmill on the Mill Brook, 18 buildings and shops in total. In these small workshops, inventors developed designs for new products as well as making both new and old items more quickly. In Windsor and other towns up and down the Connecticut River Valley (known as the Precision Valley), new industries attracted more people and stimulated the creation of commercial downtowns. Mills, stores, and homes were clustered between the river and the steep hillsides.

There are two reasons that Robbins & Lawrence can be considered as founders of the precision tool industry. In 1851, Robbins and Lawrence traveled to London to demonstrate their rifles at the Great Exhibition, held in London's Crystal Palace.  The rifles were made in Windsor using interchangeable parts.  They won a medal and so impressed the British Army that they placed an order for 25,000 rifles for the Crimean War and also ordered 141 of the Robbins & Lawrence metal-working machines making the firm the first large-scale exporter of machine tools.  began the “American System” for producing interchangeable parts which accelerated the development of the precision tool-making industry that followed rapidly.

The second reason Robbins & Lawrence can be credited with the birth of the precision tool industry is the number of people who were employed at the factory that went on to work at, or found, other companies. J.W. Roe produced a "Genealogy of the Robbins & Lawrence Shop" which is reproduced here, with permission, from Lindsay Publications. With the development of interchangeable parts, machines of all sorts could be made in large numbers and sold more cheaply. The manufacture of sewing machines, typewriters, bicycles, engines and cars soon followed.  Precision machine tools which makes standardized parts make the mechanical equipment of our modern world.

Windsor, Vermont played an important role in the development of precision manufacturing and the machine tool industry in America. The Robbins & Lawrence armory served as a breeding ground for innovation in the mid-19th century and as a center for excellence in the high tech industry of its day. Military leaders and industrialists traveled to Windsor to learn about the new “American System” of manufacturing, and workers from Windsor were aggressively recruited by other emerging industries. By continually increasing productivity, the machine tool industry spread the notion that material abundance was possible for a broad cross section of the American people. At its full maturity in the mid 20th century, the machine tool industry provided the backbone of American industrial strength and helped the United States develop into a world power. 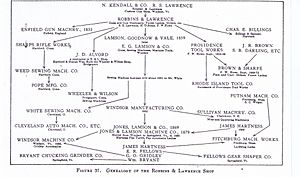 This 4,000 square-foot exhibition focuses on the people whose work made great societal changes possible and the rise of the “American System” of manufacturing. “Shaping America” is the first comprehensive exhibition to examine Vermont's industrial history in-depth and explores the broad themes of innovation and problem solving, craftsmanship, and the influence of precision manufacturing upon American history and culture. Precision manufacturing reinforced the growth of the American middle class and laid the foundation for the consumer culture that developed during the 19th and 20th centuries. The program was supported by the National Endowment for the Humanities.

All content from Kiddle encyclopedia articles (including the article images and facts) can be freely used under Attribution-ShareAlike license, unless stated otherwise. Cite this article:
American Precision Museum Facts for Kids. Kiddle Encyclopedia.