Weathersfield is a town in Windsor County, Vermont, United States. The population was 2,825 at the 2010 census.

The town of Weathersfield was named for Wethersfield, Connecticut, the home of some of its earliest settlers. The Connecticut town had taken its name, in turn, from Wethersfield, a village in the English county of Essex, the name of which derived from "wether", or in Old English wither, meaning a castrated lamb. In England, wethers were trained to lead flocks of ewes to pasture. It was a supreme irony that the name of the Vermont town (with an 'a' inserted) would derive from a connection to sheep, the animal that would come to define Weathersfield's earliest antecedents and first put it on the map.

The man responsible for that feat was a native of Boston who had become a European trader. William Jarvis was appointed by President Thomas Jefferson as U.S. Consul General to Portugal, after founding a trading house in Lisbon. In 1811 Jarvis imported from Spain to his farm at Weathersfield Bow the first Merino sheep brought to America. Jarvis set aside eight of the 4,000 Merino sheep he imported as gifts to former President Jefferson and to President James Madison.

"I cannot forbear, Sir," Jarvis wrote to Jefferson, "making you an offer of a Ram & Ewes, both as a mark of my great esteem & well knowing that the experiment cannot be in better hands." Jarvis was a wealthy financier and gentleman farmer who had bought up most of the flood plain of Weathersfield. Jarvis was also one of the most prominent Republicans in the Connecticut River Valley. Thanks to his introduction of Merino sheep, he provided the underpinning for Vermont agriculture for the next century.

Rev. John Dudley, a sometime missionary to the Choctaw Indians, a graduate of Yale Seminary, the descendant of one of the earliest families of Connecticut (his ancestor William Dudley settled in Guilford in the early 17th century) and a widely reprinted Congregational preacher, made his home in Weathersfield, where his son William Wade Dudley was born.

On August 20, 2011, Weathersfield celebrated the 250th anniversary of its town charter. 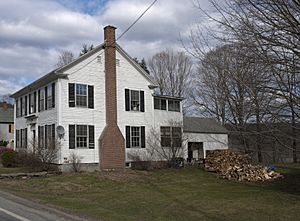 A house in Perkinsville

There were 1,167 households out of which 26.2% had children under the age of 18 living with them, 61.6% were married couples living together, 5.9% had a female householder with no husband present, and 28.8% were non-families. 22.1% of all households were made up of individuals and 11.0% had someone living alone who was 65 years of age or older. The average household size was 2.39 and the average family size was 2.77.

All content from Kiddle encyclopedia articles (including the article images and facts) can be freely used under Attribution-ShareAlike license, unless stated otherwise. Cite this article:
Weathersfield, Vermont Facts for Kids. Kiddle Encyclopedia.