Kids Encyclopedia Facts
For the literary career of the British statesman of the same name, see Winston Churchill as writer.

He is nowadays overshadowed, even as a writer, by the more famous British statesman of the same name, to whom he was not related.

Churchill was born in St. Louis, Missouri, the son of Edward Spalding Churchill by his marriage to Emma Bell Blaine. He attended Smith Academy in Missouri and the United States Naval Academy, where he graduated in 1894. At the Naval Academy, he was conspicuous in scholarship and also in general student activities. He became an expert fencer and he organized at Annapolis the first eight-oared crew, which he captained for two years. After graduation he became an editor of the Army and Navy Journal. He resigned from the navy to pursue a writing career. In 1895, he became managing editor of the Cosmopolitan Magazine, but in less than a year he retired from that, to have more time for writing. While he would be most successful as a novelist, he was also a published poet and essayist.

His first novel to appear in book form was The Celebrity (1898). However, Mr. Keegan's Elopement had been published in 1896 as a magazine serial and was republished as an illustrated hardback book in 1903. Churchill's next novel—Richard Carvel (1899)—was a phenomenal success, selling some two million copies in a nation of only 76 million people, and made him rich. His next two novels, The Crisis (1901) and The Crossing (1904), were also very successful.

Churchill's early novels were historical, but his later works were set in contemporary America. He often sought to include his political ideas into his novels. 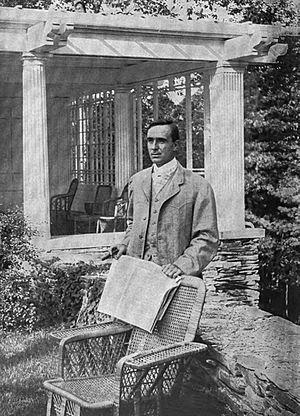 Churchill at his home, Windsor, Vermont

In 1898, a mansion designed by Charles Platt was built for Churchill in Cornish, New Hampshire. In 1899, Churchill moved there and named it Harlakenden House. The house was also used as the summer home of Woodrow Wilson from 1913-1915 (he leased it from Churchill). He became involved in the Cornish Art Colony and went into politics, being elected to the state legislature in 1903 and 1905. In 1906 he unsuccessfully sought the Republican nomination for governor of New Hampshire. In 1912, he was nominated as the Progressive candidate for governor but did not win the election and did not seek public office again. In 1917, he toured the battlefields of World War I and wrote about what he saw, his first non-fiction work.

Sometime after this move, he took up painting in watercolors and became known for his landscapes. Some of his works are in the collections of the Hood Museum of Art (part of Hopkins Center for the Arts at Dartmouth College) in Hanover, New Hampshire, and the Saint-Gaudens National Historic Site in Cornish, New Hampshire.

In 1919, Churchill decided to stop writing and withdrew from public life. As a result of this he was gradually forgotten by the public. In 1923, Harlakenden House burned down. The Churchills moved to an 1838 Federal estate, part of the Cornish Colony called Windfield House (now called Hillside) at 23 Freeman Road in Plainfield, NH, furnishing it with items saved from the fire. In 1940, The Uncharted Way, his first book in twenty years, was published. The book examined Churchill's thoughts on religion. He did not seek to publicize the book and it received little attention. Shortly before his death he said, "It is very difficult now for me to think of myself as a writer of novels, as all that seems to belong to another life."

Churchill died in Winter Park, Florida, in 1947 of a heart attack. He was predeceased in 1945 by his wife of fifty years, the former Mabel Harlakenden Hall. He is featured on a New Hampshire historical marker (number 16) along New Hampshire Route 12A in Cornish.

Churchill and his wife had three children, including their son Creighton Churchill, a well-known writer on wines. His great-grandson is the Albany, New York, journalist Chris Churchill.

In the 1890s, Churchill's writings first came to be confused with those of the British writer with the same name. At that time, the American was the much better known of the two, and it was the Englishman who wrote to his American counterpart about the confusion their names were causing among their readers.

They agreed that the British Churchill should adopt the pen name "Winston Spencer Churchill", using his full surname, "Spencer-Churchill". After a few early editions this was abbreviated to "Winston S. Churchill"—which remained the British Churchill's pen name. The two men arranged to meet on two occasions when one of them happened to be in the other's country, but were never closely acquainted.

Their lives had some other coincidental parallels. They both gained their tertiary education at service colleges and briefly served (during the same period) as officers in their respective countries' armed forces (one was a naval, the other an army officer). Both Churchills were keen amateur painters, as well as writers. Both were also politicians, although here the comparison is far more tenuous, the British Churchill's political career being far more illustrious.

All content from Kiddle encyclopedia articles (including the article images and facts) can be freely used under Attribution-ShareAlike license, unless stated otherwise. Cite this article:
Winston Churchill (novelist) Facts for Kids. Kiddle Encyclopedia.