Unity is a town in Sullivan County, New Hampshire, United States. The population was 1,671 at the 2010 census. The town includes the villages of Unity, East Unity, Quaker City, and West Unity.

Prior to British colonization, the Connecticut River valley was populated by bands of the Western Abenaki, who lived in sometimes-large villages of longhouses. Depending on the season, they would either remain near their villages to fish, gather plants, engage in sugaring, and trade or fight with their neighbors, or head to nearby fowling and hunting grounds. Later, they also farmed tobacco and the "three sisters": corn, beans, and squash. 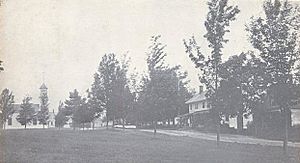 Colonization eventually resulted in the establishment of the Province of New Hampshire. Within that province, the area known as modern-day Unity was part of a territory chartered in 1753 and named "Buckingham" after John Hobart, 1st Earl of Buckinghamshire. Grants in the area were given by both the early Massachusetts government and by Governor Benning Wentworth, which led to disputes. The town was incorporated as "Unity" in 1764 after amicable resolutions of the disputes were reached.

In the 1790 census, the town had 538 residents. Unity was on the Second New Hampshire Turnpike, an important trade route chartered in 1799 that connected Amherst, New Hampshire to Claremont. By 1810, the town had 1,044 inhabitants, with two grain mills, five sawmills, a clothing mill and a distillery. Sheep farming was a principal business. 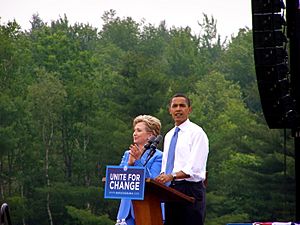 On June 27, 2008, Presidential candidate Barack Obama and former rival Hillary Clinton appeared together in Unity at their first public event since Clinton pulled out of the race to be the Democratic presidential candidate. Unity was reportedly chosen because of the town's name and because, in the 2008 primary, Obama and Clinton each received 107 votes from Unity citizens.

There were 504 households, out of which 30.4% had children under the age of 18 living with them. 66.5% were married couples living together, 4.2% had a female householder with no husband present, and 23.6% were non-families. 17.1% of all households were made up of individuals, and 4.4% had someone living alone who was 65 years of age or older. The average household size was 2.59, and the average family size was 2.89.

Unity is drained by the Little Sugar River.

All content from Kiddle encyclopedia articles (including the article images and facts) can be freely used under Attribution-ShareAlike license, unless stated otherwise. Cite this article:
Unity, New Hampshire Facts for Kids. Kiddle Encyclopedia.