Goshen is a town in Sullivan County, New Hampshire, United States. The population was 810 at the 2010 census.

Incorporated in 1791, Goshen was first settled in 1768 as a part of Saville (now Sunapee). The name Goshen may have been taken from Goshen, Connecticut, where many residents had relatives.

According to the United States Census Bureau, the town has a total area of 22.6 square miles (59 km2), of which 22.5 sq mi (58 km2) is land and 0.1 sq mi (0.26 km2) is water, comprising 0.40% of the town. The long ridge of Mount Sunapee occupies the eastern edge of town. The highest point in Goshen is an unnamed knob on the ridge (near Goves Mountain) where the elevation reaches 2,529 feet (771 m) above sea level. Goshen lies almost fully within the Connecticut River watershed, though a small corner in the southeast of town is in the Merrimack River watershed.

There were 279 households, out of which 33.3% had children under the age of 18 living with them, 64.5% were married couples living together, 9.7% had a female householder with no husband present, and 21.5% were non-families. 17.2% of all households were made up of individuals, and 7.2% had someone living alone who was 65 years of age or older. The average household size was 2.63 and the average family size was 2.96. 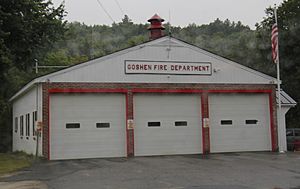 All content from Kiddle encyclopedia articles (including the article images and facts) can be freely used under Attribution-ShareAlike license, unless stated otherwise. Cite this article:
Goshen, New Hampshire Facts for Kids. Kiddle Encyclopedia.