Sunapee is a town in Sullivan County, New Hampshire, United States. The population was 3,365 at the 2010 census. Sunapee is home to part of Lake Sunapee. The town includes the village of Georges Mills. 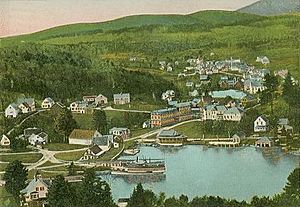 Like many other towns, this one went through name changes before its incorporation in 1781: "Saville" in 1768, "Corey's Town", and then "Wendell", for one of the Masonian Proprietors, John Wendell. The marsh near Sunapee Middle High School still bears Wendell's name. The name "Sunapee" was substituted for "Wendell" by the legislature in 1850. The town, Lake Sunapee and Mount Sunapee share the name which comes from the Algonquian Indian words "suna" meaning "goose", and "apee", meaning "lake". The Indians called the area "Lake of the Wild Goose" because it is shaped like a goose, with the beak being in Sunapee Harbor. 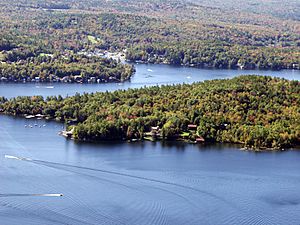 Before Sunapee was a sizable tourist attraction, it was an industrial area. One factory produced 110 clothespins a minute. After the factories faded away, the major attraction became the pristine lake, once surrounded by a number of grand hotels. People used large ferries to get from hotel to hotel around the lake, but the ferries were mostly gone by 1915, when the automobile was widely introduced to the area. Lake Sunapee is the only lake in New Hampshire with three working lighthouses, which were originally built in the 1890s by the Woodsum brothers and are currently maintained by the Lake Sunapee Protective Association. 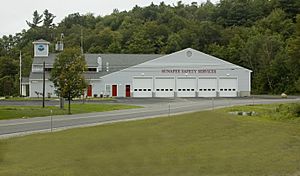 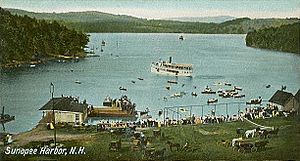 There were 1,443 households, out of which 27.1% had children under the age of 18 living with them, 55.2% were headed by married couples living together, 7.9% had a female householder with no husband present, and 32.6% were non-families. 25.5% of all households were made up of individuals, and 8.8% were someone living alone who was 65 years of age or older. The average household size was 2.31, and the average family size was 2.74. 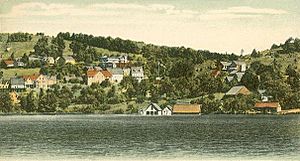 The town of Sunapee maintains a volunteer Fire Safety Program. Despite the amount of waterfront property and the number of boaters coming from Sunapee, the fire department does not have a public safety diver.

All content from Kiddle encyclopedia articles (including the article images and facts) can be freely used under Attribution-ShareAlike license, unless stated otherwise. Cite this article:
Sunapee, New Hampshire Facts for Kids. Kiddle Encyclopedia.