Newport is a town in and the county seat of Sullivan County, New Hampshire, United States. It is 43 miles (69 km) west-northwest of Concord. The population was 6,507 at the 2010 census. A covered bridge is in the northwest. The area is noted for maple sugar and apple orchards. Prior to county division in 1827, Newport was in Cheshire County. The central part of town, where 4,769 people resided at the 2010 census, is defined as the Newport census-designated place (CDP) and is located next to the Sugar River at the junction of New Hampshire routes 10 and 11. The town also includes the villages of Kelleyville, Guild, and North Newport.

Granted in 1753 by Colonial Governor Benning Wentworth, the town was named Grenville after George Grenville, Prime Minister of the United Kingdom and brother-in-law of William Pitt. But ongoing hostilities during the French and Indian War, as close as the Fort at Number 4 at Charlestown, delayed settlement. Nevertheless, in 1761 the town would be incorporated as Newport, for Henry Newport, a distinguished English soldier and statesman.

It was first settled in 1763 by pioneers from North Killingworth, Connecticut. Absalom Kelsey was one of the earliest settlers. The first blow in clearing the forests was struck by Absalom Kelsey on the D.F. Pike farm at the foot of Claremont Hill, Newport, New Hampshire. At that time, the Connecticut River was the only route for travel, until a road was cut through the wilderness to Charlestown in 1767. The following year, the first gristmill was established. But dissatisfied with treatment by the state government far beyond the mountains, Newport in 1781 joined 33 other towns along the Connecticut River and seceded from New Hampshire to join Vermont. George Washington, however, would dissolve their union with Vermont in 1782, and the towns rejoined New Hampshire.

With excellent soil for farming, and abundant water power from the Sugar River and its South Branch to run mills, Newport grew prosperous. The first cotton mill was established by Colonel James D. Wolcott in 1813. Local cabinet making flourished, producing much fine furniture. And then in 1817, perhaps inspired by the Erie Canal, businessmen proposed digging a canal to connect the Connecticut and Merrimack rivers—beginning with the Sugar River, and using its source, Lake Sunapee, as a reservoir. The plan was abandoned before it got started. In 1871, the Sugar River Railroad connected to Newport from Bradford.

But the river was recognized as central to industrial development, and in 1820, mill owners from Claremont, Sunapee and Newport united to create the Sunapee Dam Corporation, which built a dam to regulate the Sugar River's flow, running mill machinery even during drought. This plan worked, and over 120 water wheels would turn along the stream's course. By 1859, when the population was 2,020, Newport had three woolen mills and two tanneries. It also had the Sibley Scythe Company, established in 1842, which manufactured the scythes that cleared jungle during construction of the Panama Canal. It closed in 1929.

The venerable mill town has significant architectural landmarks, including the 1823 South Congregational Church designed by Elias Carter, the Newport Opera House built in 1886, and the Richards Free Library, built as the home of Colonel Seth Mason Richards in 1898.

During the summer and fall of 1765, six young men came to Newport from Killingworth, Connecticut, cleared six acres of land each, and, after getting in a crop of rye, returned home and spent the winter. The following year, in June 1766, these men having an addition of two to their number, making eight in all, five having families, came and made the first permanent settlement. No record or tradition is found showing the precise day of their arrival. All accounts agree that they arrived in town Saturday night; that they were detained by a bad place in the road on Pike Hill, where they camped for the night; and the following day, after accomplishing the remainder of their journey, they spent in religious worship under the shadow of a pine tree which stood just south of the A. Pease residence.

The following were among the earliest settlers, the first five having families. 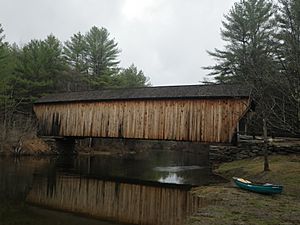 Newport is drained by the Sugar River and its South Branch, with the town center at their confluence. The North Branch joins the Sugar River north of Newport village and east of North Newport. The highest point in town is along its southern border, where an unnamed ridge has an elevation of approximately 1,920 feet (590 m) above sea level.

The town is served by state routes 10, 11 and 103. Newport is home to Parlin Field Airport.

Newport's public schools are within the Newport School District. Richards Elementary School educates children from kindergarten through 5th grade. Newport Middle and High Schools educates students from 6th through 12th grades. In fall 2016, 5th and 6th grade students at Towle Elementary were transferred to the other schools. The building is still used for athletics. Within the western region of the town, located is the Newport Montessori School, which is a private school that harbors pre-kindergarten through 8th grade students.

All content from Kiddle encyclopedia articles (including the article images and facts) can be freely used under Attribution-ShareAlike license, unless stated otherwise. Cite this article:
Newport, New Hampshire Facts for Kids. Kiddle Encyclopedia.