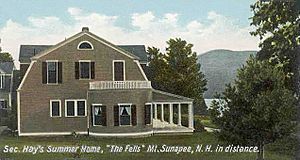 Situated at the south end of Lake Sunapee, this town has gone through numerous name changes. It started in 1753 as "Dantzic", after the Baltic seaport. The first provincial grant in 1754 named the town "Hereford", in honor of Edward Devereaux, Viscount Hereford. Colonial Governor John Wentworth renewed the grant in 1772 under the name "Fishersfield", for his brother-in-law, John Fisher. The town was finally incorporated as "Newbury" in 1837, as suggested by settlers originally from Newbury, Massachusetts.

The Fells Historic Site, located adjacent to the John Hay National Wildlife Refuge, is part of 876 acres (3.55 km2) protected of a forest country estate. Protection efforts have enabled Lake Sunapee to consistently be named one of the cleanest lakes in the state.

The northern half of the town drains into Lake Sunapee, which in turns drains west via the Sugar River into the Connecticut River and thence to Long Island Sound. The southern half of the town, including the eastern side of Mount Sunapee, drains via Andrew Brook and the West Branch of the Warner River to the Warner River, which flows east to the Contoocook River, then into the Merrimack River, and ultimately to the Gulf of Maine. 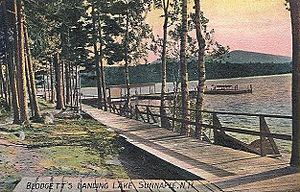 There were 691 households, out of which 30.7% had children under the age of 18 living with them, 63.5% were married couples living together, 6.9% had a female householder with no husband present, and 26.5% were non-families. 20.7% of all households were made up of individuals, and 8.0% had someone living alone who was 65 years of age or older. The average household size was 2.46 and the average family size was 2.84. 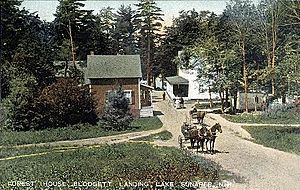 All content from Kiddle encyclopedia articles (including the article images and facts) can be freely used under Attribution-ShareAlike license, unless stated otherwise. Cite this article:
Newbury, New Hampshire Facts for Kids. Kiddle Encyclopedia.