Keene is home to Keene State College and Antioch University New England. It hosted the state's annual pumpkin festival from 1991 to 2014, several times setting a world record for most jack-o'-lanterns on display.

The grocery wholesaler C&S Wholesale Grocers is based in Keene.

The community was granted as "Upper Ashuelot" in 1735 by Colonial Governor Jonathan Belcher to 63 settlers who paid five pounds each and whose properties were assigned by lot. Settled after 1736, it was intended to be a fort town protecting the Province of Massachusetts Bay during the French and Indian Wars. When the boundary between Massachusetts and New Hampshire was fixed in 1741, Upper Ashuelot became part of New Hampshire.

In 1747, during King George's War, the village was attacked and burned by Natives. Colonists fled to safety, but would return to rebuild in 1749. It was regranted to its inhabitants in 1753 by Governor Benning Wentworth, who renamed it "Keene" after Sir Benjamin Keene, English minister to Spain and a West Indies trader. Located at the center of Cheshire County, it became county seat in 1769. Land was set off for the towns of Sullivan and Roxbury, although Keene would annex 154 acres (0.62 km2) from Swanzey (formerly Lower Ashuelot). 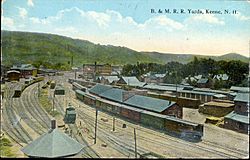 Boston and Maine railroad yard in Keene, circa 1916

Timothy Dwight, the Yale president who chronicled his travels, called the town "...one of the prettiest in New England." Situated on an ancient lake bed surrounded by hills, the valley with fertile meadows was excellent for farming. The Ashuelot River provided water power for sawmills, gristmills and tanneries. After the railroad arrived in 1848, numerous other industries were established. Keene became a manufacturing center for wooden-ware, pails, chairs, sashes, shutters, doors, pottery, glass, soap, woolen textiles, shoes, saddles, mowing machines, carriages and sleighs. It also had a brickyard and foundry. Keene was incorporated as a city in 1874, and by 1880 had a population of 6,784.

New England manufacturing declined in the 20th century, however, particularly during the Great Depression. Keene is today a center for insurance, education and tourism. The city nevertheless retains a considerable inventory of fine Victorian architecture from its flush mill town era. An example is the Keene Public Library, which occupies a Second Empire mansion built about 1869 by manufacturer Henry Colony.

Keene's manufacturing success was brought on in part by its importance as a railroad city, being the meeting place of the Cheshire Railroad, the Manchester & Keene Railroad, and the Ashuelot Railroad. By the early 1900s all had been absorbed by the Boston & Maine Railroad. Keene was home to a railroad shop complex and two railroad yards. The Manchester & Keene Branch was abandoned following the floods of 1936. Beginning in 1945, Keene was a stopping point for the Boston & Maine's streamlined trainset known at that time as the Cheshire. Keene became noteworthy again in 1962 when F. Nelson Blount chose the city for the site of his Steamtown, U.S.A. attraction. Unfortunately, the plan fell through, and after one operating season in Keene the museum was relocated to nearby Bellows Falls, Vermont. The Boston & Maine abandoned the Cheshire Branch in 1972, leaving the Ashuelot Branch as Keene's only rail connection to the outside world. In 1978 the B&M leased switching operations in Keene to the Green Mountain Railroad, which took over the entire Ashuelot Branch in 1982. Customer decline and track conditions forced the Green Mountain to end service on the Ashuelot Branch in 1983 and return operating rights to the B&M. However, there were no longer enough customers to warrant service on the line. In 1984 the last train arrived in and departed Keene, consisting of Boston & Maine EMD GP9 1714 with flat cars for rail removed from the railyard. Track conditions on the Ashuelot Branch were so poor at the time that the engine returned light to Brattleboro, and a hi-rail truck was used to remove the flatcars instead. In 1995 the freight house, one of the last remaining railroad buildings in town, burned due to arson. Today the railroad beds through town exist as the Cheshire Rail Trail and the Ashuelot Rail Trail.

In 2011, the radical fathers' rights activist Thomas Ball immolated himself on the steps of a courthouse in Keene to protest the court system.

According to the United States Census Bureau, the city has a total area of 37.5 square miles (97.1 km2). 37.3 square miles (96.5 km2) of it is land and 0.3 square miles (0.7 km2) of it is water, comprising 0.67% of the town. Keene is drained by the Ashuelot River. The highest point in Keene is the summit of Grays Hill in the city's northwest corner, at 1,388 feet (423 m) above sea level. Keene is entirely within the Connecticut River watershed, with all of the city except for the northwest corner draining to the Connecticut via the Ashuelot.

State highways converge on Keene from nine directions. New Hampshire Route 9 leads northeast to Concord, the state capital, and west to Brattleboro, Vermont. Route 10 leads north to Newport and southwest to Northfield, Massachusetts. Route 12 leads northwest to Walpole and Charlestown and southeast to Winchendon, Massachusetts. Route 101 leads east to Peterborough and Manchester, Route 32 leads south to Swanzey, New Hampshire, and to Athol, Massachusetts, and Route 12A leads north to Surry and Alstead. A limited-access bypass used variously by Routes 9, 10, 12, and 101 passes around the north, west, and south sides of downtown.

Keene is served by Dillant–Hopkins Airport, located just south of the city in Swanzey.

Keene is located in a humid continental climate zone. It experiences all four seasons quite distinctly. The average high temperature in July is 82 °F (28 °C), and the record high for Keene is 102 °F (39 °C). As with other cities in the eastern U.S., periods of high humidity can raise heat indices to near 110 °F (43 °C). During the summer, Keene can get hit by thunderstorms from the west, but the Green Mountains to the west often break up some of the storms, so that Keene doesn't usually experience a thunderstorm at full strength. The last time a tornado hit Cheshire County was in 1997.

The winters in Keene can be very harsh. The most recent such winter was 2002–2003, when Keene received 112.5 inches (2,860 mm) of snow. The majority of the snowfall in Keene comes from nor'easters, areas of low pressure that move up the Atlantic coast and strengthen. Many times these storms can produce blizzard conditions across southern New England. Recent examples are the blizzard of 2005 and the blizzard of 2006. Keene is situated in an area where cold air meets the moisture from the south, so often Keene gets the jackpot with winter storms. Aside from snow, winters can be very cold. Even in the warmest of winters, Keene usually has at least one night below 0 °F (−18 °C). During January 2004, Keene saw highs below freezing 25 of the days, including five days in the single digits and one day with a high of zero. Overnight lows dropped below zero 12 times, including 7 nights below −10 °F (−23 °C). The record low in Keene is −31 °F (−35 °C). In addition to the cold temperatures, Keene can receive biting winds that drive the wind chill down below −30 °F (−34 °C).

Snow can occur right through the end of April, but on the other end, 80 °F (27 °C) days can begin in late March. Autumn weather is similar. Keene's first snowfall usually occurs in early November, though the city can also see 60 °F (16 °C) days into mid-November. Significant rain events can occur in the spring and fall. For example, record rainfall and flooding with the axis of heaviest rain (around 12 inches (300 mm)) near Keene occurred in October 2005. Another significant flood event occurred in May of the following year. 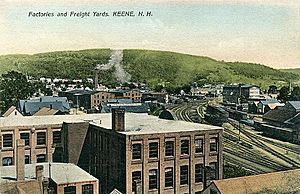 There were 9,052 households, out of which 23.0% had children under the age of 18 living with them, 39.1% were headed by married couples living together, 10.6% had a female householder with no husband present, and 46.5% were non-families. 31.8% of all households were made up of individuals, and 12.6% consisted of someone living alone who was 65 years of age or older. The average household size was 2.26, and the average family size was 2.83.

Keene has over 20 churches and one synagogue. A significant landmark in downtown Keene is the United Church of Christ at Central Square, colloquially known in town as the "White Church" or the "Church at the Head of the Square". A second church on the square was Grace United Methodist Church, also known as the "Brick Church", but is now in private hands, having no affiliation with Grace United Methodist.

Keene is the seat of the Roman Catholic Parish of the Holy Spirit, whose pastor is the Dean of the Monadnock Deanery, a division under the see of the Diocese of Manchester. The parish has two churches in the City of Keene, Saint Bernard and Saint Margaret Mary. Keene has one Episcopal church, Saint James, which is within the Episcopal Diocese of New Hampshire. Keene also has one Greek Orthodox church, Saint George, which is under the see of the Metropolis of Boston.

The town's synagogue is the Congregation Ahavas Achim.

The Church of Jesus Christ of Latter-day Saints building is home to the Keene Ward and is part of the Nashua, New Hampshire Stake. 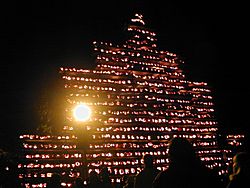 Every October from 1991 to 2014, Keene hosted an annual Pumpkin Festival. The event set world records for the largest simultaneous number of jack-o'-lanterns on display several times. The first time was in 1993, when Keene set the record with less than 5,000 carved and lit pumpkins. The tally from the 2003 festival stood as the record until Boston took the lead in 2006, but Keene reclaimed the world record in 2013, with a total of 30,581 pumpkins, according to Guinness. During the 2014 festival, college students, the majority not enrolled at Keene State, caused riots in nearby neighborhoods, resulting in the city council declining to grant the festival's sponsors a license to hold the event in 2015. Several communities came forward from there, and Laconia became the new host of the annual festival.

In late August or early September the city hosts the Keene Music Festival. Several stages are located throughout the downtown area during the day's events, which are free to the public and sponsored by locally owned businesses. Visitors, mostly from the local community, roam the city's sidewalks listening to the dozens of bands.

In 1979, First Lady Rosalynn Carter dedicated the bandstand in Central Square as the E. E. Bagley Bandstand, after the noted composer of the National Emblem March who made Keene his home until his death in 1922.

The Cheshiremen Chorus, a local chapter of the Barbershop Harmony Society, meet every Tuesday at 7 pm at the United Church of Christ on Central Square.

The Monadnock Pathway Singers are an all-volunteer hospice group based in Keene whose members come from many different towns within Cheshire County. They sing in nursing homes, hospitals, assisted-living centers and in private homes throughout Cheshire County.

Every year, the Keene branch of the Lions Clubs International performs a Broadway musical at the Colonial Theatre (a restored theatre dating back to 1924), to raise money for the community. Other theatres and auditoriums include the new Keene High School Auditorium and the county's largest auditorium, the Larracey Auditorium at Keene Middle School, and The Putnam Arts Lecture Hall on the campus of Keene State. Keene Cinemas is the local movie theater located off of Key Road.

Keene is home to the Keene Swamp Bats baseball team of the New England Collegiate Baseball League (NECBL). The Swamp Bats play at Alumni Field in Keene during June and July of each summer. The Swamp Bats are four-time league champions (2000, 2003, 2011, and 2013). They are consistently at the top of the NECBL in attendance, having led the league in 2002, 2004, and 2005.

Einbeck, in Germany, is a partner city. 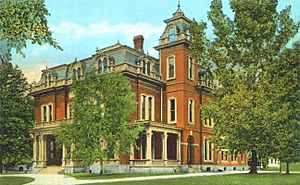 Keene is often considered a minor college town, as it is the site of Keene State College, whose 5,400 students make up over one-quarter of the city's population, and Antioch University New England.

All content from Kiddle encyclopedia articles (including the article images and facts) can be freely used under Attribution-ShareAlike license, unless stated otherwise. Cite this article:
Keene, New Hampshire Facts for Kids. Kiddle Encyclopedia.