Washington is a town in Sullivan County, New Hampshire, United States. The population was 1,123 at the 2010 census. Situated in a hilly, rocky, forested area, and with 26 lakes and ponds, Washington is a picturesque resort area. It is home to Pillsbury State Park. 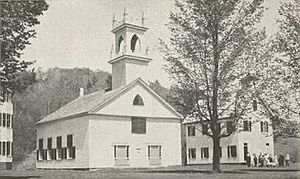 Granted in 1735 by Colonial Governor Jonathan Belcher of Massachusetts, the town was one of the fort towns designated to protect the colonies from Indian attack, named "Monadnock Number 8". In 1751, the town was granted by Governor Benning Wentworth as "New Concord". As the grant was never settled, the charter was revoked. Reuben Kidder of New Ipswich acquired the grant, naming it "Camden". The first settlers arrived in 1768 and built log houses. By 1773, the community had 132 inhabitants. On December 13, 1776, the newly established American revolutionary government incorporated the town as "Washington", after George Washington — one of the first named in his honor.

By 1830, the population had grown to 1,135. Using water power from the streams, mills manufactured lumber, barrel staves, shingles, chair parts, bobbins, whip sockets, hosiery, bricks and washboards. Gristmills ground grain. Sheep farms, producing wool and mutton, were an important business. In 1840, there were 200 farms. Tubbs Union Academy was founded in 1849, and although it did not last long, the school once enrolled over 100 students from New Hampshire and beyond. The first Seventh-day Adventist church was established in Washington in 1862. In 1886, the town produced 53 tons of maple sugar.

The railroad era brought tourists, and hotels were built on the lakes and ponds; however, with 19th-century migration to the Midwest, the town's population dwindled. As of 1960, it contained only 162 inhabitants. Washington has grown since, as its scenic beauty attracts tourists and retirees. The town contains significant examples of early architecture, including the Town Hall, built as a meetinghouse in 1787, the Congregational Church built in 1840, and the first Seventh-day Adventist Church built circa 1843.

According to the United States Census Bureau, the town has a total area of 47.6 square miles (123.3 km2), of which 45.4 sq mi (117.6 km2) is land and 2.2 sq mi (5.7 km2) is water, comprising 4.62% of the town. Ashuelot Pond is in the southwest, and part of Highland Lake is in the south. Lovewell Mountain, elevation 2,496 feet (761 m) above sea level, is the highest point in town. As Edwin A. Charlton writes in New Hampshire As It Is (1855), the mountain "received its name from Captain John Lovewell, who was accustomed to ascend it for the purpose of discovering the wigwams of the Indians, and who, on one occasion, killed seven Indians near its summit." The Washington Town Common, elevation 1,507 feet (459 m), is the highest town center in the state. (The town hall of Clarksville is located at a higher elevation—1,980 feet (600 m)—but there is no other village development there.)

There were 370 households out of which 24.1% had children under the age of 18 living with them, 67.8% were married couples living together, 4.1% had a female householder with no husband present, and 24.9% were non-families. 19.5% of all households were made up of individuals and 9.5% had someone living alone who was 65 years of age or older. The average household size was 2.42 and the average family size was 2.73.

All content from Kiddle encyclopedia articles (including the article images and facts) can be freely used under Attribution-ShareAlike license, unless stated otherwise. Cite this article:
Washington, New Hampshire Facts for Kids. Kiddle Encyclopedia.