Amherst is a town in Hillsborough County, New Hampshire, United States. The population was 11,201 at the 2010 census. Amherst is home to Ponemah Bog Wildlife Sanctuary, Hodgman State Forest, the Joe English Reservation and Baboosic Lake.

The town center village, where 613 people resided at the 2010 census, is defined as the Amherst census-designated place. The village is also listed on the National Register of Historic Places as Amherst Village Historic District. 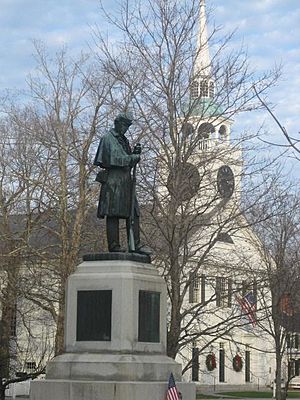 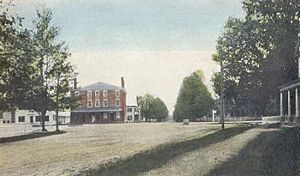 Like many New England towns, Amherst was the result of a land grant given to soldiers – in this case, to soldiers in 1728 who had participated in King Philip's War. Settled about 1733, it was first called "Narragansett Number 3", and then later "Souhegan Number 3." In 1741, settlers formed the Congregational church and hired the first minister. Chartered on 18 January 1760 by Colonial Governor Benning Wentworth, the town was named for General Lord Amherst, who commanded British forces in North America during the French and Indian War. Lord Jeffrey Amherst is also infamous for initiating the practice of giving smallpox blankets to Native Americans in a genocidal effort "to Extirpate this Execrable Race" (as quoted from his letter to Colonel Henry Bouquet on July 16, 1763).

In 1770, Amherst became the county seat of Hillsborough County, due largely to its location on the county's major east-west road. It continued to prosper through the Revolutionary War and afterwards. In 1790, the southwestern section broke off and became the town of Milford, and in 1803, the northwest section departed to become Mont Vernon. The development of water-powered mills allowed Milford to grow at Amherst's expense, and the county seat was moved to Milford in 1866.

The town population remained relatively stagnant until after World War II, when Amherst and many surrounding towns saw an influx of newcomers as they became part of the greater Boston region.

Franklin Pierce, who later become the 14th President of United States of America, studied under Judge Edmund Parker in Amherst. He wed Jane Means Appleton, the daughter of a former president of Bowdoin College, in a house on the town green.

The Nashua and Wilton Railroad passed through Amherst.

According to the United States Census Bureau, the town has a total area of 34.7 square miles (89.9 km2), of which 34.2 square miles (88.5 km2) is land and 0.54 square miles (1.4 km2) is water, comprising 1.51% of the town. Located on the Souhegan River, Amherst is drained by Beaver, Bloody, and Joe English brooks. Amherst's highest point is on Chestnut Hill at the town's northern border, where the elevation reaches 865 feet (264 m) above sea level. Amherst lies fully within the Merrimack River watershed. 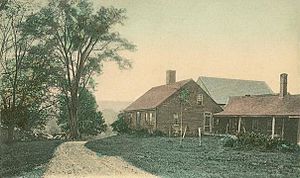 There were 4,063 households, out of which 37.7% had children under the age of 18 living with them, 72.2% were headed by married couples living together, 6.7% had a female householder with no husband present, and 18.2% were non-families. 14.5% of all households were made up of individuals, and 6.0% were someone living alone who was 65 years of age or older. The average household size was 2.76, and the average family size was 3.06.

Amherst is home to Clark and Wilkins elementary schools, Amherst Middle School and Souhegan High School. The elementary schools handle children from Amherst only. Seventh and eighth graders from neighboring Mont Vernon attend the middle school on a tuition basis, while Amherst and Mont Vernon jointly own Souhegan High School, which serves both towns.

All content from Kiddle encyclopedia articles (including the article images and facts) can be freely used under Attribution-ShareAlike license, unless stated otherwise. Cite this article:
Amherst, New Hampshire Facts for Kids. Kiddle Encyclopedia.