Kids Encyclopedia Facts
"Mont Vernon" redirects here. It is not to be confused with Mount Vernon (disambiguation).

Mont Vernon is a town in Hillsborough County, New Hampshire, United States. The population was 2,409 at the 2010 census.

It is not clear why it is spelled differently from the many other towns in the United States named after Mount Vernon, the home of George Washington. Some say the "u" in "Mount" was accidentally dropped by a town clerk filling out official papers; some say the change was made deliberately to draw attention to the town; some say it uses the French spelling of "mont" as a nod to what was then the region's large French-Canadian population. According to town histories, as late as the 1920s, there was some dispute about how to spell the name, with the post office and one of its most prominent hotels using a "u" for many decades.

Mont Vernon broke away from neighboring Amherst in 1803, following a dispute over the town parish. It later added a small portion of neighboring Lyndeborough.

Mont Vernon's general history follows that of many towns in this region: Originally settled for agriculture, its farms were hard hit after the Civil War when railroads opened up better farming land in the Midwest. Population peaked in 1870 and began to decline.

By the late 1890s it had become a tourist town, drawing summer visitors from points south, notably Boston, who escaped the heat in Mont Vernon's hills. At one point it had five large summer hotels, including the Grand Hotel, located on top of Grand Hill.

The hotel business began to wither with the development of the automobile, which allowed tourists to reach places like the White Mountains of New Hampshire, and it was killed by the Great Depression. The town's population bottomed out at barely 300 in 1930, at which time the Grand Hotel was destroyed in a fire. The remaining hotels were torn down before World War II.

Since the war, Mont Vernon has slowly become a suburban community. This was significantly accelerated in 1962-63 when engineers and technicians employed at Sanders Associates in Nashua found homes in Mont Vernon attractive. Some bought dormant farms, some homes in the village. All brought a willingness to pay more taxes to improve the schools. The active farms were squeezed out and eventually only the Pomeroy farm survived. It wasn't until the 1970 census that the town's official population passed mid-19th century highs.

Agriculture, including a 1940s and 1950s boom in chicken and egg farming, has all but disappeared. As of 2008, the town has one dairy farm. The town's only General Store closed in January 2010, after more than 120 years in the same location. It reopened in early 2012 under the name Fishbones, renovated in the style of the 1850s, but was shuttered less than a year later in November 2012. It has since reopened again under new owners, using the old General Store nameplate.

Mont Vernon made national news in March 2012 due to debate during the annual town meeting over whether to rename a small fishing hole called Jew Pond. The town eventually renamed it Carleton Pond, after the family which donated the surrounding property to the town.

There were 693 households out of which 43.3% had children under the age of 18 living with them, 73.7% were married couples living together, 5.6% had a female householder with no husband present, and 16.9% were non-families. 12.1% of all households were made up of individuals and 6.1% had someone living alone who was 65 years of age or older. The average household size was 2.90 and the average family size was 3.17. 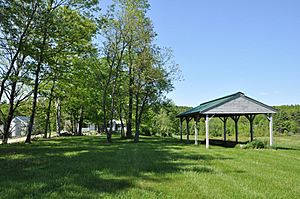 The town has two major annual celebrations: On the last Saturday in September, it hosts "Lamson Farm Day" at a town-owned farm to celebrate its agricultural past. In late April or early May, it has a celebration of spring called the "Mont Vernon Spring Gala". Both feature games, food and local entertainers.

All content from Kiddle encyclopedia articles (including the article images and facts) can be freely used under Attribution-ShareAlike license, unless stated otherwise. Cite this article:
Mont Vernon, New Hampshire Facts for Kids. Kiddle Encyclopedia.