Kids Encyclopedia Facts
Not to be confused with Merrimack County, New Hampshire.

Merrimack is a town in Hillsborough County, New Hampshire, United States. The population was 25,494 at the 2010 census, making it the eighth-largest municipality in New Hampshire. In 2013, Merrimack was named the twenty-third best place to live in the United States by CNN Money Magazine.

The first known settlers of the area currently known as Merrimack appeared sometime after the last ice age. European settlers first came to the area in the late 17th century when the area was still in dispute between the Province of New Hampshire and Massachusetts Bay Colony.

Merrimack is a Native American term meaning sturgeon, a type of fish. The Pennacook Indians named the Merrimack River after this fish because of the vast population that once existed there. The Penacooks spelled it Monnomoke or Merramake. "When the town was incorporated, it took the name of the river and spelled it Merrymac.", according to the Merrimack Historical Society.

Matthew Thornton, a signer of the Declaration of Independence, lived and was buried in Merrimack. The Signer's House and Matthew Thornton Cemetery are still located in the town.

The Boston and Maine Railroad laid tracks through the town in the 19th century, with several stations operating until the mid-20th century when the advent of the automobile transformed Merrimack from a largely agricultural community to a bedroom community of Boston and nearby cities in New Hampshire. Since 1970 it has been the home of an Anheuser-Busch brewery, their easternmost, and one of their smallest plants in the United States. It is home to a brewery tour and one of the five stables for the Budweiser Clydesdales.

The Merrimack School Board attracted national attention in 1995 when it passed a "prohibition of alternative lifestyle instruction" act, which resulted in the removal of a work by William Shakespeare from the school curriculum. The board members who supported the act were voted out in the subsequent board election.

Shadows of the former villages that now make Merrimack still exist. However, the boundaries and exact definitions are unclear due to the expansion of suburban development in the town during the latter half of the 20th century.

The area of town near Naticook Lake and Continental Boulevard, the name of this area comes from Matthew Thornton, one of the signers of the Declaration of Independence who lived in Merrimack and is now buried in a cemetery near the intersection of Daniel Webster Highway (U.S. Route 3) and Greeley Street. Thorntons Ferry Elementary School is located on Camp Sargent Road. 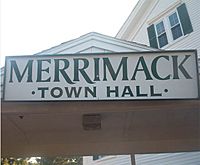 Next to the Breezeway at Merrimack Town Hall

The center of town is not known as "Merrimack Village" per se, but constitutes the area between the more defined Reeds Ferry and Thorntons Ferry areas. Largely considered to be located at the Public Library on the corner of Baboosic Lake Road and Daniel Webster Highway, Merrimack Village was built along the Souhegan River that roughly cuts the current town in half. The elementary school in this part of town is named after James Mastricola, who deeded the land to the town upon his death. The lower and upper elementary schools, the middle school, Merrimack High School, the library, and the current town hall, among other buildings, are all located on the land formerly owned by Mastricola.

The "village" is considered to extend westward to the Amherst border. This is due in large part to the former Town Meetinghouse, which was located on the corner of Turkey Hill Road and Meetinghouse Road.

For additional demographics on the area of Merrimack east of the Everett Turnpike, see East Merrimack, New Hampshire.

There were 8,832 households out of which 41.9% had children under the age of 18 living with them, 68.1% were married couples living together, 7.8% had a female householder with no husband present, and 20.9% were non-families. 15.8% of all households were made up of individuals and 3.8% had someone living alone who was 65 years of age or older. The average household size was 2.84 and the average family size was 3.19.

The Rotary Nashua West club has organized the Rock'N Ribfest every year since 2003. The Ribfest has been held on the Anheuser-Busch grounds of Merrimack for the last eight years and was held there once again on June 15–17, 2012. The Ribfest is the official site for the New Hampshire state barbecue championship, where judges taste test the Northeast's best BBQ from more than 30 competitors.

All content from Kiddle encyclopedia articles (including the article images and facts) can be freely used under Attribution-ShareAlike license, unless stated otherwise. Cite this article:
Merrimack, New Hampshire Facts for Kids. Kiddle Encyclopedia.