Acworth is a town in Sullivan County, New Hampshire, United States. At the 2010 census, the town had a total population of 891. 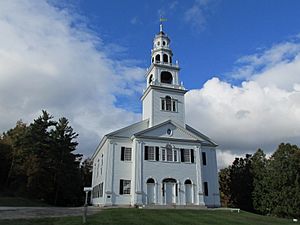 Originally chartered by Governor Benning Wentworth in 1752, it was called Burnet after William Burnet, a former governor of the Province of Massachusetts Bay. In 1754, however, the French and Indian War broke out, and no settlements were made under the charter. Wentworth regranted the township on 19 September 1766, naming it after Sir Jacob Acworth, a former Surveyor of the Royal Navy.

Acworth was incorporated in 1772 by Governor John Wentworth, but war again slowed its development. With the close of the Revolution, however, Acworth grew quickly. By 1859, it had 1,251 inhabitants, most of whom were occupied in agriculture. The Cold River provided water power for industry, including 5 sawmills, a gristmill, a woolen factory, a bobbin factory and a peg factory. There was also a boot and shoe manufacturer. Acworth is a source for museum-quality crystals such as beryl. The town of Acworth, Georgia was named for this town, because this was the hometown of a railroad engineer there.

The town is crossed by one numbered state highway, New Hampshire Route 123A, which follows the Cold River and passes through the village of South Acworth.

There were 318 households out of which 30.8% had children under the age of 18 living with them, 60.7% were married couples living together, 6.0% had a female householder with no husband present, and 26.4% were non-families. 19.8% of all households were made up of individuals and 7.5% had someone living alone who was 65 years of age or older. The average household size was 2.63 and the average family size was 3.06.

All content from Kiddle encyclopedia articles (including the article images and facts) can be freely used under Attribution-ShareAlike license, unless stated otherwise. Cite this article:
Acworth, New Hampshire Facts for Kids. Kiddle Encyclopedia.