Acworth is a city in Cobb County, Georgia, United States. It is part of the Atlanta metropolitan area. The 2019 estimate for Acworth's population is 22,818. As of the 2010 census, this city had a population of 20,425, up from 13,422 in 2000. Acworth is located in the foothills of the North Georgia mountains along the southeastern banks of Lake Acworth and Lake Allatoona on the Etowah River. Unincorporated areas known as Acworth extend into Bartow, Cherokee and Paulding counties.

Acworth's is often referred to as "the Lake City" because of its proximity to Lake Allatoona and Lake Acworth. 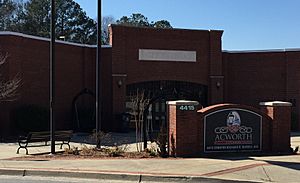 Like the rest of Cobb County, the area now containing Acworth was carved out of the former Cherokee Nation in 1831, after expelling the natives.

The Western and Atlantic Railroad was completed through town in 1840. A watering station for the locomotives was established there.

The town received its current name in 1843 from Western & Atlantic Railroad engineer Joseph L. Gregg, who named it for his hometown of Acworth, New Hampshire, which was named for the former Royal Navy Surveyor Sir Jacob Acworth.

Telegraph lines reached the town in 1851.

A private school was opened for white students in 1852. A newer private school operated from 1899 to 1935, when they integrated with the Cobb County School District. Until 1935, high school students from Acworth paid tuition to attend. Students outside the town were subsidized by the Cobb County School Board. Black students were educated separately in a grammar school. The closest black high school was in Atlanta. Later, students were bused by the county to a segregated school in Marietta.

Acworth was incorporated on December 1, 1860.

The town was captured by the Union June 6, 1864. The city was called "Little Shanty" by the Union troops, to contrast it with the next town south, "Big Shanty", since renamed Kennesaw. The town was under martial law during the six months of occupation. On November 13, 1864, the town was burned down by the army of General W. T. Sherman, sparing twelve homes and one church; its citizens were left destitute.

During segregation, the railroad tracks served as a racial divide, with African Americans living to the northeast of the tracks and the whites to the southwest. There were few common public events. When a movie theater was erected in the 1930s, blacks were allowed to access the balcony from a separate entrance. Whites sat on the main floor.

Volunteers formed a fire department in 1907.

There were eventually a total of three textile mills in town from 1905 through the 1980s. They employed about 800 workers at their peak.

In 1926, Main Street was paved. When the entire Dixie Highway (old U.S. Route 41 and part of the Cherokee Peachtree Trail) was paved in 1929, over 800 tourist vehicles entered the city daily.

When the Etowah River was dammed, forming Lake Allatoona, citizens feared that land near the town would become a swamp. They successfully petitioned for a second dam, resulting in Lake Acworth in the 1950s. This became a tourist attraction.

The town made a major improvement in its water and sewage lines in the late 1940s.

African-American students were schooled separately from white children until 1967.

In 2011, the filming of several scenes for the Footloose remake took place in downtown Acworth. The Acworth Presbyterian Church was used as the primary church, and the house of Mayor Tommy Allegood was used as Julianne Hough's character's home.

Acworth is located in the foothills of the North Georgia mountains along the southeastern banks of Lake Acworth and Lake Allatoona on the Etowah River. It is bordered by the city of Kennesaw to the southeast and by Bartow and Cherokee counties to the north.

Unincorporated areas considered Acworth for mailing purposes extend into southeast Bartow County, southwest Cherokee County, and northeast Paulding County. Some of the incorporated portions of Acworth east of Nance Road and Acworth Due West Road have a Kennesaw mailing address.

Public education in Acworth is handled by the Cobb County School District. 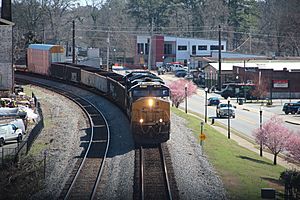 The main route through the center of Acworth is Main Street, a two-lane road. It is known as "Old 41" as it was formerly the route for US 41. State Route 92 and the new Highway 41 pass through the southern part of the city. The newly built Seven Hills Connector connects South Acworth to Paulding County. Bells Ferry Road goes through Acworth, Kennesaw, Marietta, and Woodstock.

All content from Kiddle encyclopedia articles (including the article images and facts) can be freely used under Attribution-ShareAlike license, unless stated otherwise. Cite this article:
Acworth, Georgia Facts for Kids. Kiddle Encyclopedia.