Milton is a town in Strafford County, New Hampshire, United States. The population was 4,482 at the 2020 census. A manufacturing, resort and residential town, Milton includes the village of Milton Mills. The primary village in town, where 593 people resided at the 2020 census, is defined as the Milton census-designated place (CDP), and is located along New Hampshire Route 125 and the Salmon Falls River, just north of Route 75. 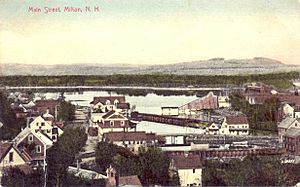 Originally a part of Rochester variously called the "Northeast Parish", "Three Ponds" or "Milton Mills", the town was settled in 1760. It would be set off and incorporated in 1802 as "Milton", the name either a contraction of "mill town", or else derived from a relative of the Wentworth colonial governors -- William Fitzwilliam, Earl Fitzwilliam and Viscount Milton. The town of Fitzwilliam also bears his name. 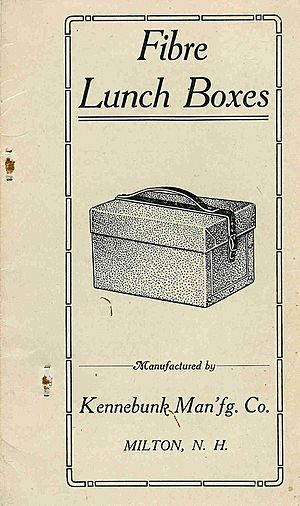 Located along the Maine border, Milton was the location of early industry which used water power from the Salmon Falls River. Six miles north of Milton, the village of Milton Mills was once called "Shapleigh Mills" and during the 19th century had 4 shoe factories, 2 woolen mills, 1 felt mill, 1 carriage shop and many sawmills. In 1872, Henry H. Townsend established The Miltonia Mills, which manufactured fine wool blankets used by Admiral Robert E. Peary on his expedition to the North Pole, and Admiral Richard E. Byrd at the Antarctic. The company went bankrupt in 1950. The building then became Greene Tanning, a leather tannery where the employees of the mill made raw leather into leather known throughout the world as being some of the highest in quality.

The high concentration of water powered industries in Milton caused Ira W. Jones to found and operate an engineering firm from offices on Main Street in Milton. The company did business as I W Jones Engineers.

The town contains some distinctive architecture, particularly the Milton Town House, built in 1808, and the Milton Free Public Library, a Second Empire former schoolhouse built at Milton Mills in 1875. 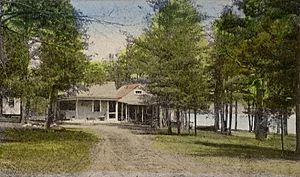 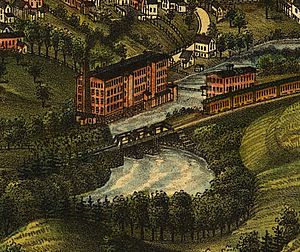 Milton Free Public Library (MFPL) is housed in a building that was constructed in 1875 as a school house, and continued in this role until 1991, when its elementary grade students were bused daily down to Milton. It was the following year — 1992 — that MFPL relocated from smaller premises on Jug Hill Road to its current location.

The architecture of the Little Red School House, as the town-owned building is still affectionately known, is French Second Empire style with dormer windows upstairs, and a mansard roof. It also has a bell tower, with a still-functioning school bell. The bell is retained as part of the building's tradition, and clanged on days of very special significance, which do not include occasions when weighty book fines are paid off.

All content from Kiddle encyclopedia articles (including the article images and facts) can be freely used under Attribution-ShareAlike license, unless stated otherwise. Cite this article:
Milton, New Hampshire Facts for Kids. Kiddle Encyclopedia.