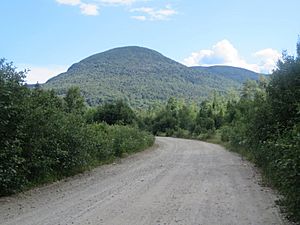 Success is an unincorporated township located in Coos County, New Hampshire, USA. It is located directly to the east of the city of Berlin, New Hampshire, and borders on the state of Maine. Success is part of the Berlin, NH–VT Micropolitan Statistical Area.

As of the 2010 census, the township had a population of 0. There are some seasonal homes, cabins, and cottages mainly located around Success Pond which gives the township a small seasonal population, though none of these homes are primary residences.

As of 2005, one of the larger landowners in Success is the Androscoggin Valley Regional Refuse Disposal District.

The state of New Hampshire requires a nearby incorporated town to exercise the responsibilities that would fall to the Town of Success if it should be incorporated. Some towns in the state bearing such responsibility have sought to be relieved of it.

A railroad was built by Blanchard and Twitchell Company in 1892 from the Boston and Maine Railroad in Berlin, New Hampshire, through the aboriginal forests to Success Pond in the northeast corner of the township. Six locomotives transported lumber and logs to Berlin sawmills over the 26-mile (42 km) railway. Most of the Success township forests were gone within a decade, but the railway operated after 1904 as the George W. Blanchard and Sons Company Railroad. Boston and Maine kept 1,600 feet (490 m) of interchange track in service when the remainder of the railroad was dismantled in 1907.

The highest point in the township is the summit of Mount Success, a peak in the Mahoosuc Range with an elevation of 3,565 feet (1,087 m) above sea level.

As of the census of 2010, there were no people living in the township, although there are a number of summer homes mainly on the shores around Success Pond.

All content from Kiddle encyclopedia articles (including the article images and facts) can be freely used under Attribution-ShareAlike license, unless stated otherwise. Cite this article:
Success, New Hampshire Facts for Kids. Kiddle Encyclopedia.