Shelburne is a town in Coös County, New Hampshire, United States. The population was 353 at the 2020 census. It is located in the White Mountains, and part of the White Mountain National Forest is in the south. Shelburne is home to Leadmine State Forest. The Appalachian Trail crosses the town.

Shelburne is part of the Berlin, NH–VT Micropolitan Statistical Area. 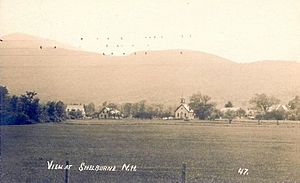 First granted in 1769 by Governor John Wentworth, the town was named for William Petty Fitzmaurice, Earl of Shelburne. He was a supporter of independence for the American colonies, and at his insistence, King George III recognized the independence of the United States. The town was first settled in 1771, and incorporated on December 13, 1820, when Shelburne voters chose to keep the name. It included Shelburne Addition until that was set off and incorporated in 1836 as Gorham.

On August 3, 1781, the town was attacked by a party of six Indians, who had earlier raided Bethel and Gilead, Maine. They killed one man and took another into captivity. The rest of the inhabitants fled to Hark Hill, where they spent the night before sheltering in Fryeburg.

Shelburne provided excellent soil for farming on either side of the Androscoggin River, but not far from the stream it becomes mountainous. The Atlantic and St. Lawrence Railroad, which opened to Gorham on July 23, 1851, and later became the Grand Trunk Railway, passed through the southern part of the town. In 1859, the population was 480.

Located at the northern end of the Mount Washington Valley, Shelburne has a beautiful grove of birch trees, popular with artists and photographers, dedicated to the town's soldiers who served in World War II. 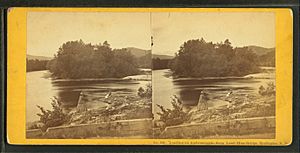 There were 156 households, out of which 31.4% had children under the age of 18 living with them, 67.9% were married couples living together, 2.6% had a female householder with no husband present, and 26.9% were non-families. 20.5% of all households were made up of individuals, and 6.4% had someone living alone who was 65 years of age or older. The average household size was 2.43 and the average family size was 2.85. 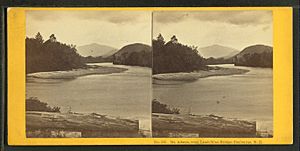 All content from Kiddle encyclopedia articles (including the article images and facts) can be freely used under Attribution-ShareAlike license, unless stated otherwise. Cite this article:
Shelburne, New Hampshire Facts for Kids. Kiddle Encyclopedia.